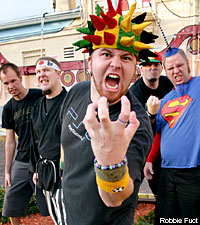 Comedy metal troupe Psychostick, who are actually really serious about their craft, will once again tour with Look What I Did on the Pay Off the Van Tour. The tour benefits the band's personal economic welfare, as their goal is singular: to pay off their tour van, affectionately dubbed 'The Chariot.' It's a smart financial move for any band to minimize their touring expenses, especially in this climate of monetary chaos. While most bands tour for the party, Psychostick are being much more calculating about it.

"In the beginning of our touring days, we didn't get money from a label or an investor to start touring and we did it on our own dime," guitarist Josh Key told Noisecreep. "Rob traded in his dream truck, a bad-ass Ford F150, for a big van and a huge 20k debt so that we could get out on the road. We've been making payments on our trusty van that we call The Chariot since the summer of 2006. We did our calculations and concluded that one more good tour will put us over the mark, since we owe just about six grand on it."

So how to knock off those last six G's? By using it. "We figured a tour with our friends and fellow road-dogs Look What I Did would be appropriate," Key said. "Paying this van off will be a huge personal victory for us, as well as for independent music in general. So come out to our show, buy a CD or T-shirt, and share in our victory! And of course, thanks to all our fiercely loyal kickass fans that have been there through it all."

Drummer Alex Preiss even laughed off the band's decision to be super responsible on this tour and said in a statement. "Wait ... I'm supposed to be a rocker ... what I meant to say was: We just want to party!"

Given the temptations that often present themselves on the road, Psychostick will remain disciplined and not give into the desire to blow their monies and go wild instead of being responsible and paying off The Chariot. Key said, "I know that some people will assume we are going to blow all that money on beer, but I assure you that we are in much greater danger of spending it all on tacos and burritos. Also, if something unfortunate and ironic happens, like the engine explodes or we totally wreck the van and all the profits end up going to that, we will simply become nihilists and start an angry grindcore band called Putrid Bile of Despair."

Download Psychostick Songs
Filed Under: Look What I Did, LookWhatIDid, Psychostick
Categories: Interviews, Tours
Comments
Leave A Comment
Back To Top