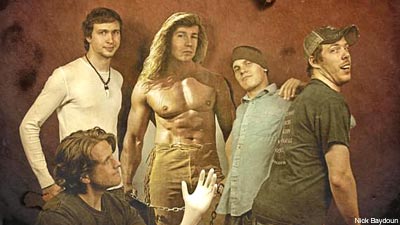 Barry Donegan, frontman for mathcore collective Look What I Did, has confirmed for Noisecreep that their forthcoming LP -- which will be in stores on Feb. 9 as part of a new label deal the band signed with the Modernist Movement -- will be titled 'Atlas Drugged.'

No, folks -- it isn't going to be a concept record about someone giving roofies to the primordial cradler of the heavens. But the dozen tracks that serve as the follow-up to 2005's 'Minuteman for the Moment' are built around a conceptual motif. Donegan says the band's next disc will be a proper concept record; the band's already got an idea for it.

"The title itself kind of speaks to a failure and self-interest in society," he tells Noisecreep. "It kind of has this tone of this heavy psychiatric drug use being done by everybody, and sort of the failure of the American empire and how it kind of persists across every aspect of life. We live in really, really pathetically dark times, and I just wanted the record to reflect that."

Donegan says 'Atlas Drugged' will be a little more accessible than 'Minuteman,' which was the album the band released before its former label, Koch offshoot Combat Records, folded.

"I look at the last record like a German chocolate cake kind of thing," he starts. "We put a whole lot of music on top of itself, and every bite was super dense. It's got a lot of material in there that bears scrutiny, but as far as listening to it in one pass ... it's very difficult to do. We did that on purpose. We wanted it to be really hard to listen to, to be a record that paid off on the 100th listen more than the first. This time we wanted one that paid off pretty well on the first and 100th listen, something that had depth and detail -- but it wasn't a complete learning curve. You weren't struggling to deal with it. So we kind of went for a more direct approach, but we kept everything weird about the band.

Look What I Did Tour Dates