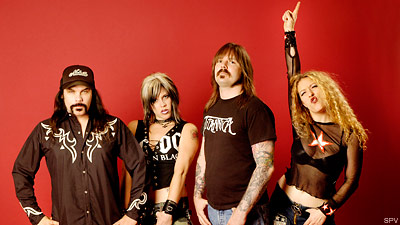 Those who feel nauseous after seeing controversial redneck metal band Nashville Pussy will be more likely to lose their lunch than ever when the band play on April 8 in New York with Green Jelly and Psychostick. Not only will the concert feature guitarist Ruyter Suys' sleazy exploits, it will take place on The Jewel, a cruise ship that will rock with the waves as the crowd rocks to the bands.

"I'm really looking forward to this show," said Rocks Off! cruise conductor Jake Szufnarowski. "Not only does it kick off our season, but it's sure to be our most robust and musically divergent yet."

Last October, The Rocks Off! Concert Cruise Series featured a pummeling show that featured performances by Eyehategod, Pig Destroyer, Goatwhore and Strong Intention. In the past, the series has hosted tamer concerts by Clutch, Bad Brains, Fishbone, Electric Six, Cracker and others. "[The cruise show] was the most extraordinary concert we've done in New York since our first CBGB's show," said Bad Brains guitarist Dr. Know.