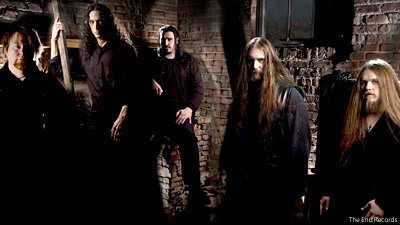 "I don't do the typical metal lyrics. My inspiration in writing is my dislike of traditional lyrics," Novembers Doom vocalist Paul Kuhr told Noisecreep. In the twenty years November's Doom has been a band one of the most chilling and noted parts of the band has been the very personal lyrics Paul writes, which, in the darker regions of metal reconstructed folklore and mythology are standard, making Paul's words a rarity.

Paul points out the type of lyrics he holds a disdain for saying, "I don't want to mention band names, but especially when you get into gore/grind bands all you're doing is telling a story. You have no experience in what you're saying and if you do you need to be locked up. A lot of lyrics feel to me like a high school creative writing class where there is no substance. You're just telling a story, and some people are fantastic at it, don't get me wrong, there are some great authors that can write fantastic lyrics in a story sense. I'm just not one of them. I can't tell a story and have it come off convincing. It's just not me. But I find a lot of bands do that, especially in the doom metal genre and it's very cliché and very cheesy, overdone and ridiculous. I've never been a fan of that."

One reason Paul writes in a personal narrative is that even when he growls what he's saying can be understood with no lyric sheet needed. "I worked very hard at an early time in the band to make my vocal style as audible as possible and I always said if I'm going to work that hard to make my words clear I better have something to say."

This is not to say Paul hasn't had some missteps in his lyrical approach over the years, in fact one of the most requested November's Doom songs is one he wishes never to have written. Paul explains, "There are songs that, when said and done, after recording become more popular than I thought they would have and therefore people would like for us to play them live and for personal reasons I don't want to do it. Some people have not been happy about that. There is one song in particular that people beg us to play live, 'Swallowed by the Moon', and I regret writing that song. I never should have. I never want to do it live because of its content. I'm more careful now with what I put down."