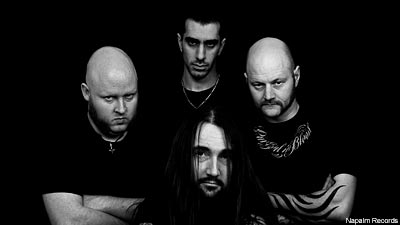 Of all the subgenres of doom metal that have reared their hoary heads over the decades, one of the most interesting has to be the small, but potent, hybrid we call 'death/doom.' Over the years, death/doom has separated itself into two very distinct camps: On the one side, you've got the bands like Swallow the Sun that aren't afraid to inject melody into their compositions and take cues from old Paradise Lost and Opeth. On the other side of the spectrum, you've got the bands like Coffins who are obsessed with the filthy, bonecrushing heaviness of Autopsy and Winter.

Lurking on the fringes, you've got Disembowelment and Thergothon, who fall somewhere to the left of funeral doom but can still claim the death/doom tag if they really want to. When queried on which side of the cavernous divide they'd stake their claim, Norway's Syrach were reluctant to categorize themselves, but admitted a kinship with maudlin Finns in Swallow the Sun (though vocalist Kenneth 'Ripper' Olsen admitted a soft spot for Autopsy's first three albums, as well). Noisecreep delved a bit deeper into their dark world and indulged in a little doom metal therapy while we were at it.

What would you name as the top 5 essential doom records for someone who was looking to get into the genre? How about your 5 favorite underground or lesser-known albums?

In my head this must be a perfect 'start-kit' for a new doom fan: Pentagram 'Relentless'; Candlemass 'Nightfall'; My Dying Bride 'Turn Loose The Swans'; Anathema 'Serenades'; and of course Syrach 'A Dark Burial' ... hehe ...

If I should recommend some more 'unknown' bands, I can just mention bands that I really like nowadays; Wall Of Sleep from Hungary, Starchild, Serpentcult from Belgium, of course our labelmates in Ahab, and maybe they're not such an underground band anymore, but I really like the things Novembers Doom have done.

As far as I'm concerned, you guys play death/doom metal. How comfortable are you with that description? I can hear bits and pieces of the Peaceville Three -- old Katatonia especially -- mixed in with a more menacing death metallic edge, especially when the vocals and searing guitar lines kick in!

Well, I think it's hard to put a label on Syrach's music. We're a bit doom, a bit death, a bit rock, a bit heavy metal and a bit '70s prog I guess ... but of course, I understand that people like to put labels on the music, so I would say that death/doom metal is a good description. I have heard before that people mention and compare us to Peaceville bands ... but it's not our intention to sound anything like them. I like some of the albums that Katatonia have done, but I won't consider myself a big fan. I think one of their recent album, 'A Long Cold Distance,' is great; I'm fascinated by the drumming on that album.

Which bands would you say had the most profound impact on the development of Syrach's sound? Who inspired you to pick up an instrument and start playing slow, heavy music?

For me it was the love of 'New Wave of British Heavy Metal.' I have always and still do listen to it a lot. I wanted to start a band that combined the heavy metal from the early '80s with the new wave of British doom metal bands (Cathedral, Anathema, Paradise Lost, My Dying Bride). Those were bands that had started a couple of years ahead of us, so I thought that a combination of those sounds would be perfect for a new band, so that was the birth of Syrach. I did both drums and vocals the first two years with Syrach, but then I decided to just concentrate on the singing (if you like to call it that, haha).

Why do Syrach play this style of music as opposed to, say, grindcore or thrash? What is its appeal to you?

Of course we make music for ourselves as well as for the fans, so I think the main reason is that we play the music we want to hear ourselves. The groove of doom music has always been appealing to me -- the slowness and the heaviness of the music, but I am also a fan of melody in those songs, something catchy. For me it's too boring if a song last 20 minutes, and there is only one riff or so. We are getting something dark out of our souls by playing and making this kind of music, so that's good therapy!