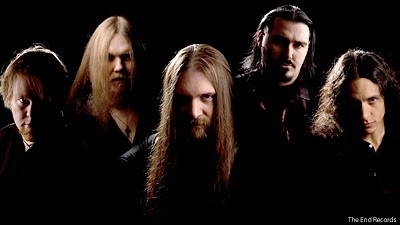 Novembers Doom have been around a real long time, 1989 to get the facts straight. They are considered to be one of forefathers of the doom metal sound, but in 2005 the band took big shifts and jumps away from that sound with the release of the ghostly melodic 'The Pale Haunt Departure'. "I never thought we'd surpass that album," vocalist and only founding member of Novembers Doom admitted to Noisecreep. "I thought that was going to be the best thing the band ever put out until we finished 'Into Night's Requiem Infernal'. To me we have surpassed everything we've ever done."

Paul continued with a smile and a laugh saying, "I know every band says these types of things because they want you to buy the new album but I TRULY believe that with this record." With ultra heavy and equally catchy 'Into Night's Requiem Infernal' finally out we caught up with Paul and asked him about what separates this album so much from the mammoth back catalog the band has created.

I know the band has gone through many changes in sound over the years, which have made the band hard to classify at times, so at this point how would you describe Novembers Doom sound?

We're really difficult to lump into one category of music. Defining our sound is rather difficult. There are a lot of people that still consider us a doom metal band. There are a lot of people who call us death metal, but then you listen to songs like 'Autumn Reflection' and that's neither metal nor doom. We are who we are. Everything we do is November's Doom. The one thing that always remains the same is that it's dark. It's dark metal, that's what it is.

The sound on 'Into Night's Requiem Infernal' may be the bands heaviest but also the most melodic, as well the record feels like a stellar progression combining the two albums before. Did you guys plan that?

Thanks. That means a lot as we really put a lot of effort into this one, more so than the other ones, where when we sat down to write it we knew we had to have a more focused idea of what we were going to do this time. Not to say we haven't done that in the past. 'Pale Haunt' was very focused and 'Novella' was very focused.

I think we've made a pretty good mix of everything this band has done with new elements. I'm really proud of it.

I know that the last two records worked on themes, like 'The Novella Reservoir' revolved around water and fluid. What themes are presented on 'Into Night's Requiem Infernal'?

Once again it's definitely themed. It's more of a... it's a touchy subject. A lot of people are going to lean one way or the other and it's not meant to be that way. It's very rooted in faith and religion, personal beliefs and things like that; it's more about questioning and storytelling. There is no preaching going on one-way or the other at all. The main focus of this record was to initiate and provoke thought. If you can go through the lyrical content and it makes you think and it makes you question your own belief system than that's exactly what I wanted it to do.

In my opinion there are too many closed-minded people and sheep. If more people would actually think about what they believe in they'd change their opinions on things rather than just believe the things they have been programmed to.

Was there any type of event or a series of them that sparked you to write such a touchy theme?

Since 'The Knowing', which was a complete concept, and was a difficult album to write. We had never tried a concept like that before. Writing a complete concept like that for us really dictated what order the songs had to be on the record because the storylines followed a timeline. I never wanted to do that again because we thought the flow should have been a little different. It worked out great, but... so ever since then whenever I have a concept I make it more of a theme. I know this is completely not what you asked me.

I got off on something in my mind and I think I avoided your question.

I've gone through a lot of changes in my life, especially in the last ten years. When starting to write 'Welcome to the Fade' I was diagnosed with spinal disease and my life was completely turned around at that time so over the last couple of years a lot of things have come into light. You question a lot more.

All of my lyrics are very personally based one way or the other. I can't come to one specific thing that made me write this. This was an idea I had for lyrical content for several years now and it just made sense now to write about these kinds of things.

What is the significance of the song 'The Fifth Day of March'?

The fifth day of March is the day my father passed away. That was a year ago this past March so it was pretty fresh when we wrote the song. It's a pretty personal song. There are some things in the song I probably won't explain for a while. That's the most personal song on the album.

The people that know me and the people that went through the situation they'll understand it; other people will get other meanings from it and that's perfect. That's what I want.

Well the song is hauntingly beautiful.

I appreciate that. I wrote the song as a tribute to my father and more so as I wrote that for my mother who survives my father, a lot of that was for her.

In the studio journal you guys mentioned you got a late start on tracking due to a hospital visit. What happened?

(Laughs) That was unbelievable. We set up all the drums on a Friday evening and after we finished setting up our bass player Chris, who is also the studio engineer, turned ghost white and went into extreme pain at three in the morning so we took him to the hospital and he had a kidney stone.

So he was back at the studio at noon the next day and in extreme pain; we tracked all the drums.

This had to have been difficult for him to work after that.

Oh yeah. He suffered. I can't say anything negative about what he did for us that weekend. He just said, 'We're on a schedule. We have to get this done.' He did a lot of lying on the floor in the control room in pain but he managed to get up and record when he needed to. It was a very interesting weekend.

You guys have been through so many members over the years, even on this album you guys lost long time drummer Joe Nunez before writing. Has the constant member changes been a source of frustration?

That has been a constant frustration. But at the same time every time we replace a band member we have gotten better and better. I think new blood is good. It keeps things fresh. When someone new comes into the band they bring with them a fire that the band has lost, and they come in with a new excitement and they want to do things and are ready to work. There are fired up and excited. In turn that fires up the rest of the band.

Sasha played with us on 'Sculptured Ivy (and stone flowers)' as a session musician back then, but brining him into the band and getting that new blood while writing this new album I think absolutely contributes to why this album is better than anything we have done.