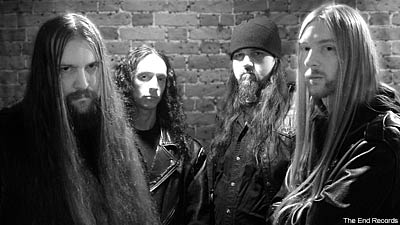 On Nov. 10, These Are They will unleash 'Who Linger,' the Chicago old school death metallers' unruly, sinister, and punishing debut LP. If you like Entombed and Bolt Thrower, These Are They are for you. But what does frontman Paul Kuhr do when he's not working with These Are They or his other band, Novembers Doom? He's a techie, and damn proud of it.

"I'm really into Apple and Mac products, and have been since the '80s," Kuhr, who is a regular at sites like MacRumors AppleInsider, tells Noisecreep. "I'm a geek about that stuff. I love that stuff."

So, when we found this out, we tempted Kuhr, who admits to jail-breaking his iPhone, by asking him if he knows anything solid about the fabled Apple iTablet. "It's all rumors at this point, but it's basically an iPhone blown up to almost 11 inches ... the rumors are that it'll have a full touch-screen, and it seems like it could be something pretty amazing. No one knows for sure. It's all speculation, but this plant in China is claiming it's manufacturing the screen for the tablet ... I told you I'm a geek about this stuff."

Kuhr will be spending a lot of time online these next few months, because unfortunately, These Are They won't be coming to any hole-in-the-wall venues near you any time soon, as they have absolutely no touring plans. They've got day jobs -- so instead, they're writing.

According to Kuhr, one of three band members with a connection to Novembers Doom (These Are They's Sasha Horn plays drums for Novembers Doom, and guitarist Steve Nicholson was a founding member of the band, leaving the fold about 15 years ago), they're writing at least one new song a week and have enough material at this point for another release.

"We get together one day a week to rehearse and write, and in one year's time ... in one year, we've formed, recorded, put out an EP, wrote our first album, recorded the album, and the album is coming out with our second album more than 60 percent done," Kuhr tells Noisecreep, proudly. "Things are moving very, very quickly. We'll be ready to record the second album by the time this album comes out."

And the new stuff, he says, is "definitely a progression and a step up in how brutal and fierce it sounds. It's good." Kuhr's also been writing material for Novembers Doom's next LP, but doesn't see that surfacing until well into 2010. "I think this trend of guitarists playing a million miles an hour and being as technical as they can, I think we're starting to see that come to an end," Kuhr offers. "And people are falling back and appreciating good songs again, and not just technical playing, which is cool."

Download These Are They Songs
Filed Under: Bolt Thrower, BoltThrower, entombed, novembers doom, NovembersDoom, these are they, TheseAreThey
Categories: Interviews, News
Comments
Leave A Comment
Back To Top