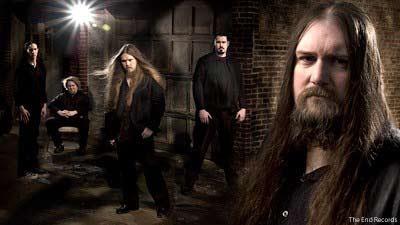 Most people haven't heard of November's Doom, even though they've been around for twenty years making critics fawn at their feet and bands cite them as an inspiration for their own brutality, but despite all this the band has never gotten the acclaim they so rightfully deserve.

"This band is an uphill battle and I blame it on our location," November's Doom vocalist Paul Kuhr told Noisecreep. "Our timing was there. We came out in 1989 and have been doing the same style of music that we're accused of copying but we were one of the first to do it."

Paul points out with a frustration, "I see some reviews of the brand new album and I'm seeing reviews saying we 'sound just like this band' or 'just like that band', recent bands that are now popular. It amazes me how people, as soon as they hear something, will pick 'Oh, that sounds so much like Anathema'. No that's Pink Floyd. That's the same pool that they're dipping from. It defiantly gets frustrating but not everyone can get lucky I guess."

Since hailing from Chicago it's not too surprising November's Doom have been looked over, the Midwest has a graveyard full of bands that should have made it but died in obscurity. "It's sad really because they're has always been fantastic metal bands in Chicago, especially in the '90s," Paul recalls. "We were completely looked over because of the scenes like the Florida death metal scene, the NY death metal scene, and the California thrash metal scene. It's a shame because there were fantastic bands here that never went on to do anything and a lot of these bands that were here could play circles around the bands that got popular."

And although November's Doom is cited for being one of the founding bands of the doom metal sound they moved way past that many albums ago and many years ago, but people still expect them to be a doom band. Paul explains, "Our band name automatically turns people away from even listing to the music. They see the word doom and say, 'I hate that slow doom shit' and they won't even give us a chance." Paul but beams hoping the name won't deter possible new fans, "If people listen to the new record they will find it's the furthest thing from what they think it's going to be."