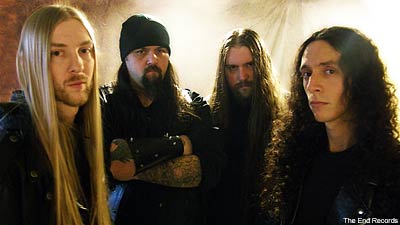 Paul Kuhr knows fans of his band Novembers Doom will likely want to check out his new project, These Are They. And they should. The Chicago-based act's debut album, 'Who Linger,' is a ferocious, down-tuned offering rife with old-school death metal riffage, and it drops Nov. 10 through The End Records. It's the kind of album that makes you glad you love metal, but despite boasting two current and one former member of Novembers Doom, the album is not a carbon copy of the doom metal specialists.

"We've had discussions in the band many times, and we knew, at least for the first album, that the comparison lines would be drawn," Kuhr, who fronts both bands, tells Noisecreep. "We knew that everything that ever came out was going to mention Novembers Doom ... Steve [Nicholson] being Novembers' original guitar player, and [drummer Sasha Horn] playing with us. We figured people would think, 'This is just Novembers Doom with two other guys.' So we had to try and make it different."

In fact, Kuhr says he even reverted, vocally, and returned to the way he used to sing on Novembers Doom's earliest material ... back when he didn't care about being audible and clear with his vocals. And the result is intimidating for anyone who doesn't adore Entombed. The good news is, These Are They are basically finished with their second album, and Kuhr says "when people hear the newest material, it's even further away from Novembers Doom, so it's definitely going to separate the two bands."

Kuhr says he started These Are They back in 2008, when he and the guitarist reconnected online, 15 years after Nicholson had jumped ship. "I realized he lived literally five minutes away from me, so we got together one night to have beers, and we started talking," he says. "Steve said he really missed jamming, and I was like, 'Let's do something.' A very short time later, we got a couple of friends together, and that's how it started. It was really that simple."

Kuhr says when Nicholson walked away from Novembers Doom, he walked away from metal essentially, selling all of his equipment, buying a Harley and joining a motorcycle club. For 15 years, he was completely disconnected from metal. "When he walked away from the band, it was disappointing for me because the guy's got incredible talent, and I didn't want to see him waste what he can do," Kuhr says. "And with him coming back ... it's like he never stopped playing. He just has natural talent."

Kuhr thinks Nicholson's complete lack of metal knowledge contributed to the old school feel of These Are They's sound. "We had discussed what we wanted to do and the key to this was ... Steve hasn't purchased a metal album in 15 years, so he has no new influences," Kuhr explains. "You mention bands ... even like, 'Hey, have you heard the new Opeth?' He doesn't know who that is.

"He's really that removed from the new stuff, and that's the key that still gives us that sound from the '90s. It's funny, he's getting into new bands now, and the other day, he's like, 'Yeah, I heard this new band Amon Amarth ... they're pretty good.' And I just have to laugh."