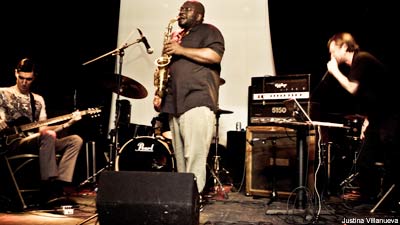 Period make the opposite of what most people consider metal. Except at the same time, the speed, musicianship and anger are still present. When the band played the Show No Mercy showcase at Public Assembly on Sept. 6, the room of what could have been 20-30 people stood as far from the stage as they could. This left about a five-foot gap in between the audience and the band, making space for the vertical sounds they created.

Misery-soaked vocals stretched out beneath discordant layers of sax, alienated guitar and oddly-crashed cymbals with spurts of raging fills. Period builds a craft similar to Normal Love, who will be playing Maze Fest in Brooklyn with Extra Life on Sept.12.