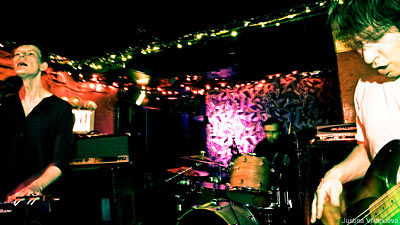 Bassist Tim Dahl even made note of it a couple weeks ago when he talked to Noisecreep about the European tour. "For me it was my favorite Child Abuse tour so far. I think the band got better and I think Luke really came into his own as a frontman," Dahl told Noisecreep.

On April 26, when Child Abuse played with Mick Barr, Skeleton$ and Grooms, Dahl's words came to life. After three or more years of watching Child Abuse, this writer has never really thought of Calzonetti as a "frontman". But I was proved it was possible at the 'Cut and Run' record release show. It was either during the title track or during 'Opportunity Zone' that Calzonetti walked away from his Casio keyboard and did vocals from the front of the stage. 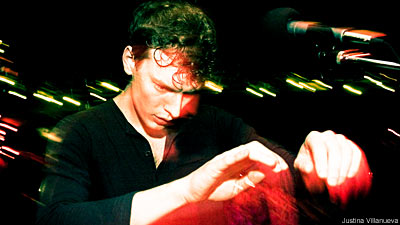 The best part about the show, however, was finally getting the grasp on the difference between 'Cut and Run' and their self-titled debut. It's so groovy! You can actually shake your booty to it. And that's exactly what happened at the show. There was booty shaking and a small mosh pit, where five or six people toppled over each other.

Throughout the show Calzonetti addressed many subjects: lame music writers, lame presidents and he even did some stand up. Before completely ending the show, though, he made sure to invite everyone to the small 'green room' for post-concert dinner. He told us how the band makes their own food before every show.