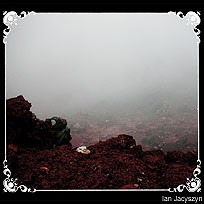 New York trio Castevet are not an easy band to wrap your head around. Ask five different people what their music sounds like and you'll get five completely different answers. "Considering that there is a wide array of comparisons being thrown at us," percussionist Ian Jacysyzn comments, "it seems that most listeners are not being alienated by what is written about our music, and listening subjectively. We could not be happier about this."

Castevet's new album, 'Mounds of Ash,' is rhythmic, angular and agile. Much of what distinguishes the band's sound can be attributed to Jacysyzn's inventive, accurate performance on the record (which he recreates masterfully live). Jacysyzn is a treat to watch, not just for drummers or musicians, but for the layman as well. They way he moves around a drum set is obviously well-rehearsed and efficient, and it's impressive to witness.

Though many have described Castevet as 'progressive' due to the unconventional timing and structure of their songs -- and to Jacysyzn's athletic drumming -- the band is certainly not 'proggy.' 'Mounds of Ash' is a surprisingly accessible record, as melodic and emotional as it is calculated and composed.

As for the future? "We've already begun writing new material," Jacysyzn says. "Our approach to songwriting is very similar to that found on 'Mounds of Ash,' in terms of melody and rhythmic ideas. The component that we're trying to develop, though, is the orchestration and timbre by which we present the songs. You can expect to hear a similar progression on our next release as to the development found between the 'Stones/Salt' EP and 'Mounds of Ash.'"

Castevet are currently gearing up for a handful of dates with Irish labelmates Altar of Plagues. "We became in touch with James from Altar of Plagues around the release of 'Stones/Salts,'" explains Jacysyzn. "We liked each other's work, did some record

trading and kept in touch. James told me that they'd be coming to the U.S. sometime during 2010, and he asked if we'd like to join some dates."

'Mounds of Ash' is out now via Profound Lore.