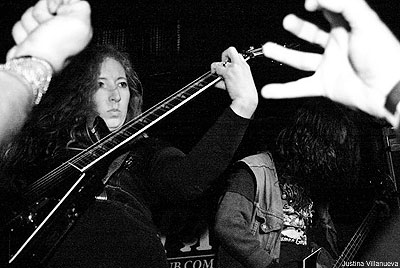 On April 18, Ludicra graced Brooklyn, N.Y.'s Europa with one of the best shows this writer has seen to date (I've covered 100 or more for Noisecreep in the last year, too). The night started with Brooklyn's own Atakke and Castevet and ended with Krallice and Ludicra.

Being the 17th show in a row the band played on the tour, it was appropriate that frontwoman Laurie S. Shanaman could barely talk. But that really didn't matter, because her lunatic growls and evil screeches are some of the most menacing vocals in modern heavy music. That Sunday night, she moved like she was in a straitjacket. People like her -- who can display that much pain -- are the reason why people like me go to watch bands live in the first place. And Ludicra will give you a high return for you money in a live setting. 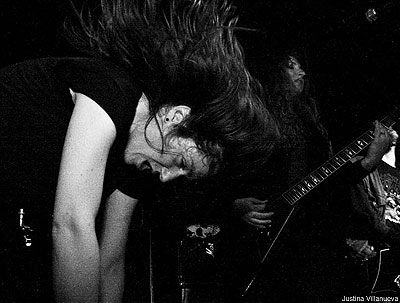 Bassist Ross Sewage is also in the band Impaled. He could teach you a thing or two about making an old school death metal grimace.

Ludicra -- like Wolves in the Thrones Room, Withered and the majority of American 'blackened' bands -- don't wear corpse paint. They don't sacrifice animals or put pigs' heads on stakes. But, they do make terribly grim black metal. The five members who make up Ludicra have been in the band for over 10 years. Even if you didn't just read that, you could tell solely by the band's live show. They are sincere. They are deeply connected to each other. Most of all, they are severely underrated, and it is just unfair to the rest of the world that hasn't been affected by them yet.

Be sure to check out Ludicra's critically acclaimed 'The Tenant' out on Profound Lore. And if you're a Twitter junkie like Noisecreep, you can follow Cobbett, Sewage and drummer Aesop Dekker at their respective Twitter accounts.