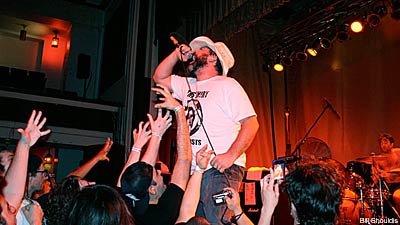 As an exercise in extreme precision, Brutal Truth have released 'Evolution in One Take: For Grindfreaks Only! Volume 2' earlier this week. The semi-follow-up to their last straight shot, 'For Drug Crazed Grindfreaks Only! Live at Nocturn Studios,' which came out in 2000, this installment was recorded at Mark It Zero studios with sound engineer Dan O'Hare.

The album sees the band play their latest record (and first in nearly a decade) 'Evolution Through Revolution' live and -- you guessed it -- in one take. Packaged with a special limited-edition patch, the album itself is limited to only 2,000 copies worldwide.

While the band finished up their three-city tour of Australia, they are offering the main studio version of 'Evolution Through Revolution' for streaming in its entirety, and have just premiered the first video from the album for the track 'Sugardaddy.'