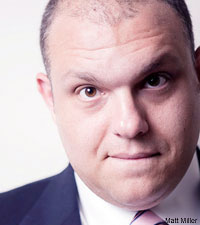 Life as a touring musician makes one yearn for the comforts of home. Only Indecision and Most Precious Blood guitarist Justin Brannan is taking it a step further. The guitarist, who has been a banker, bouncer and radio announcer, is considering a run for the New York State Senate in 2012.

"I began to appreciate coming home to my neighborhood and New York City as a whole," Brannan told Noisecreep. "Sometimes absence does make the heart grow fonder. Now that Indecision and Most Precious Blood aren't touring as much, I started getting more involved with civic groups and different neighborhood activist clubs."

Brannan also said, "Getting into politics was just a natural progression for me. It was never something I dreamed of doing. But then again, I barely sleep, so there isn't much time to dream. There is only time to do." While many hardcore and metal musicians flap their gums about change and affecting society, Brannan is taking the old adage 'Well done is better than well said' and turning it into reality.

"I gained an absolutely priceless education on the road, touring the world, and it most certainly contributed to my ability to move on to new challenges," Brannan said. In addition to his potential Senate bid, he and his girlfriend are starting an art school for Brooklyn kids. "We want to give back to the community and keep punk rock alive," he said. "And by punk rock I mean doing whatever you want. There are no rules. No lines to color inside."

Brannan is still in the planning stages with the political bid, but he's got his eye on the prize. "In the world of politics, I'm still young and have a long way to go. In the world of hardcore, I'm a senior citizen," he said.

As for the platforms he is considering, Brannan views Albany as "the poster child for political dysfunction," which is why he's gunning for a Senate seat. "There is arrogance and complacency -- an unfortunate symptom of incumbents going unchallenged and unchecked for years on end," he reasoned. "There was a time when the Empire State was the model of efficient government throughout the country -- responsible for some of the brightest government programs around. Today, our state government has been dubbed the most dysfunctional in the nation."

He points out that the state's leaders are mired in the muck of rumors and scandals, corruption and collusion when they should be working together to solve problems and create solutions. "We the people have been consistently shortchanged by those we've bestowed the responsibility of representing our interests and our children's interests. Rather than fighting for us, they have fought to maintain their own power and personal privilege," he said.

Furthermore, Brannan said, "I believe in common sense over politics and job creation over stimulus checks. I'm for tax breaks and incentives for small businesses and companies so they can create new jobs. I believe we need to reboot Albany and stop looking to New York City to fund New York State. I represent progressive Brooklyn: forward-thinking, diverse and dynamic Brooklyn, a Brooklyn that remains a unique melting pot of all cultures, faiths and languages, truly a home to everyone from everywhere."

Thanks to Tara from Disembodied for the news tip!