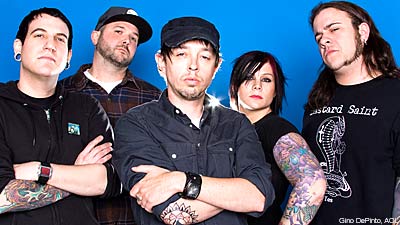 If you've discovered metal over the past decade of so, it's possible that Minnesota thundergods Disembodied might have fallen through the cracks. The hardcore metal band, which formed in 1995 created a pair of brain-rattling records, 1999's 'The Diablerie' and 2000's 'Heretic' before fragmenting into the melodic death metal/metalcore band Martyr AD.

However, in 2008, each of the members of Disembodied were interviewed separately for Brian Peterson's book 'Burning Fight: The Nineties Hardcore Revolution In Ethics, Politics, Spirit and Sound,' and afterward they were asked to reunite to play the book release party in Chicago. That led to a full-fledged reunion, which is good news for hardcore and metal fans that missed them the first time around.


The band played a handful of shows last year and tore up the stage at the New England Hardcore and Metal Fest last week. Currently, Disembodied are laying the groundwork for their third full album, which should drop like a cluster bomb before the end of the year.

On this week's ''Creep Show" Disembodied guitarist Charlie and bassist Tara joined us to talk about playing with their former bandmates after 10 years, their love of merging metal and hardcore, the upcoming album, making gelato and pastries, cooking shows and Charlie's other band Bastard Saint. 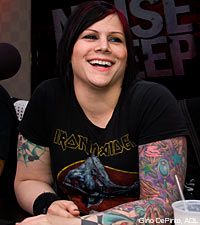 In news, we discussed the sad passings of two metal musicians, Bloodlined Calligraphy bassist Eric Cargile, who died in his sleep at age 30 and the Communion's guitarist Lee Altomare, who died unexpectedly at age 33 after undergoing routine eye surgery. The ''Creep Show' team also talked about the inaugural Cool Tour, which features As I Lay Dying, Underoath, Between the Buried and Me, the Acacia Strain and others, and this year's Summer Slaughter Tour, which will feature the return of Polish tech-death metal legends Decapitated along with the Faceless and others.

In addition to talking about bands that are touring, we discussed bands that have recently been unable to tour because of the Iceland volcano that spread ash throughout European airspace, grounding flights for days. And we addressed how Metalllica were able to brave the storm and make it from Norway to Latvia after a 24-hour journey by bus and ferry.