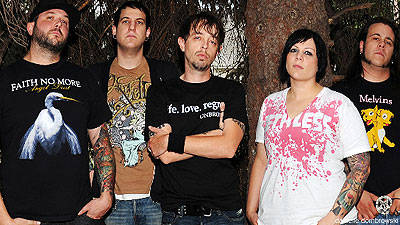 A lot has changed in hardcore in 11 years. When Disembodied where at their prime, they stood as one of the few bands not focusing the entire all their efforts around politics and social issues. There was no soapbox on stage when the band played, and if there had been it would've had a pentagram on it. "I haven't been asked about straight edge, veganism, vegetarianism or political bulls--- in any interviews," a relieved yet stunned Tara Johnson told Noisecreep. "It's just weird because that was always the focus."

The bassist admitted an aggravation to the redundancy of '90s hardcore, but now she misses it. "It's so mainstream now," she asserts. "And I'm not saying this as a whole scene, but they don't seem to care about that s---. It's kind of a bummer because it's not always about playing the heaviest note or seeing how low you can growl or high pitched, or if you have a hot keyboard player. It seems like it's much more about money, clothes and what you look like vs. what you believe in, which is why I got into punk and hardcore in the first place. It was rebellion against everything." After a pause she added, "It seems like it's missing something, unless I'm missing something."

She continued smiling through frustration, "It just sucks. I just love hardcore and I love the scene and what it stands for -- for me what I think it stands for and the fact that it isn't what I want it to be is kind of a bummer because I want to love it. I still feel like a f---ing hardcore kid. I feel like I'm taking two steps forward and the scene is taking two steps back."

For Johnson, it was hardcore way before metal. She recalled seeing bands like Rorschach playing house shows -- the shows that eventually became liner notes on LP reissues. But for her, hardcore took a hold of her as a place to find herself without judgment. It was her saving grace. "When I got into hardcore my parents were getting divorced, my grandpa just died (who I was living with), all this s--- started falling apart in my life, and I didn't know what I was doing. I started having an eating disorder. I was questioning religion (I grew up Christian, and my mom worked at a church), and I didn't know if I believed all that s---. And when I got into hardcore and punk, it was like, 'Oh my God these people feel the same way.'"

She doesn't get sense it's a place of acceptance anymore. "Now days I don't think you are given the freedom to be who you are because if you are who you are then you're ridiculed. I was the only liberal kid in my family that voted democrat and was pro-choice. It was nice to see that there was a place that I actually felt comfortable."

Though Disembodied never found themselves punching kids who weren't straight edge or vegan, the band's best crowds were the scenes known as the most unwelcoming: Salt Lake City and Dayton, Ohio. "The kids were into it, and they were f---ing brutal," Tara recalled, describing the Utah capital and how vocalist Aaron Weseman would fear a coming fight over his smoking. "He was so nervous he was going to get beat up."

But it never happened, and unlike a lot of bands they never got banned from playing shows in those areas -- a common practice for those wanting a purer hardcore. "I think it's because we never portrayed to be something we weren't. We were there to play music. Maybe they were just nicer because there was a girl in the band."