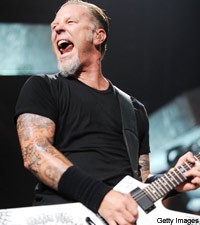 Describing a Metallica show is a more difficult task than it might seem -- simply because all the appropriate natural disaster references have likely been said. Was it like a hurricane of rock? Well, yes. A violent earthquake? Yes, quite. A violently whipping tornado of guitars? You got it.

So, put simply, the only thing to say is this: Metallica's near-sellout show in Atlanta's Philips Arena was extraordinarily loud and heavy. The jagged guitars tore the faces off of most in attendance -- and, in the case of the more-tattoos-than-clothing woman sitting to this reviewer's left, they effectively tore off some skimpy tank tops as well.

But really, such an abandonment of natural disaster phrases would be selling Metallica short, as there are few forces -- musical or otherwise -- that compare to the sheer energy and power that surged through the arena last night. And all coming, no less, from a band that has been destroying such venues for over 25 years.

Metallica's World Magnetic Tour -- still trucking across the country in support of the band's return to form album, 'Death Magnetic,' that dropped over a year ago -- finds the quartet playing on a 360-degree stage. Though the band is far from young, the men of Metallica ran like athletes around the stage to equally melt each side of the crowd. Lars Ulrich's drum set even rotates between songs, allowing him to wag his tongue at each and every ticket-holder.

Though metal music has undoubtedly grown more extreme since Metallica's heyday, it's difficult to think of a band that's got them beat for musical weight. The slow, Panzer tank crush of 'Sad But True,' the relentless attack of Magnetic's best cut, 'All Nightmare Long,' or the sizzling opening riff and calculated blast beats of 'Blackened' hit the crowd like a swift punch in the gut. But clearly suckers for punishment, and devil horns permanently fixed in the air, the crowd hung on James Hetfield's every growl and rode Kirk Hammett's every lightning-fast solo.

There's very little about a Metallica show that's arguably endearing, but 'Master of Puppets' provided such a moment. During the classic song's slow, soaring guitar solo, Hetfield cried, "Let's do it together." And an arena full of dudes singing 'whoa' in falsetto erupted, most complete with air guitar action. Several beefy guys could be spotted hugging in the mosh pit as well.

Metallica ended the show with a 'Kill 'Em All'-heavy encore, playing 'Hit the Lights' and 'Seek and Destroy,' but not before striking an audience agreement.

"We're gonna make a ourselves a deal here," Hetfield said. "If we play one more, what do we get? You give us the best of you. You've lost your throat, lost your mind and probably lost your car keys. But for this deal, we want to look you in the eye."

With that, the house lights went on. "So, do we have a deal?"

In the end, maybe Metallica shows aren't difficult to describe, because so much has been said already -- but rather because, well, they are just that good.