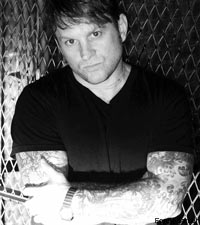 Cro-Mags frontman and soon-to-be two-time author John Joseph has revealed some details about his forthcoming book 'Meat Is for Pussies.' Following his acclaimed autobiography -- 'The Evolution of a Cro-Magnon,' which tells the story of his tough childhood in and out of foster homes and ultimately growing up on the streets of New York City -- Joseph's second book focuses on the importance of the vegetarian lifestyle that helped him turn his life around.

John Joseph tells Noisecreep of the positive effects this lifestyle has had, saying, "I've been a vegetarian/vegan for close to 30 years. It's what keeps me healthy enough to play the music I play live, which is very physical music."

Joseph goes on to explain his motivation behind the book, telling Noisecreep that, "Getting into yoga, vegetarianism and philosophy saved me from a life of crime. I have also lost a lot of people to cancer, so I just feel obligated to spread the knowledge I have gained in the last 29 years."

'Meat is For Pussies' is slated for a December release through Punkhouse.org. In a recent article in the Examiner, Joseph not only talks 'Meat is For Pussies' but also discusses plans for a reality show he has in development, and gives details on the donation center he runs in New York City.

Joseph has also been touring with a reincarnation of the Cro-Mags featuring original drummer Mackie, and members of Sick of it All and Leeway on guitar and bass.