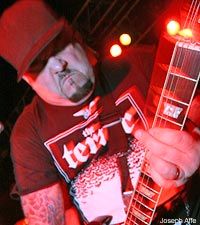 New York hardcore heroes Maximum Penalty are, by guitarist Joe Affe's own admission, "fossils." The band and its punishing hardcore sound harken back to a time before bands wore girl jeans and mascara, before every hardcore kid was rocking Peppermint Patty's hairstyle ... back when hardcore bands had something to say about everything -- and were more than willing to force feed you their stance on whatever issue it was pissing them off that week.

"We didn't want to become influenced by anything current," Affe tells Noisecreep. "When we started the record, we were like, 'We don't give a s--- if anybody likes it.' We wanted to do something we liked, that we felt we didn't rush ... and in the process, our mentality was, 'We are who we are ... so let's write these songs.' If we're feeling inspired by this topic, let's run with it. I can't speak for other bands, but we took that route."

The band's identity is what matters, but at the same time, it's not about sticking to a specific definition. "We wanted to focus on who we were, and if it comes out hardcore, that's who we really are. That's really what we come from. Obviously, there are different things going on. Maximum Penalty is not your run-of-the-mill 2009 hardcore band ... but I will say that we do what we do, and I'm hoping people will appreciate it and vibe with us on it. We could never go the route of ... whatever hardcore's called today. I just don't think that's us. It will never be us."

The fact that Maximum Penalty will be relatively unknown to today's hardcore audience is something of a blessing, according to Affe. He's looking forward of not being overly reminded of the band's past, which involved a hiatus or two and other assorted band turmoil ... typical stuff. While talking about the band's opposition to the tough-guy aesthetic, Affe mentions the band's first hiatus, which went down in 1990.

"I think it was the first hiatus of the band, and us coming back together after [frontman] Jimmy [Williams]' incarceration, and just seeing a full ... to see him change the way he did, I was inspired by that. It really put the zap back into the band.," says Affe.

Williams was a guest of the state of New York from 1990 to 1993. Affe wouldn't tell us what Williams went in for ("I'm not going to get into that," he says), but did enthuse that, once Williams was released, he came back to the band with a renewed vigor, and had a completely different attitude about things. Within a year, he had a book filled with lyrics.

"They weren't just about jail but about personal perseverance, and since then, that's been a big part of the direction of the band, lyrically," says Affe. "You can tell just listening to some of the songs. There are other things that are covered, like relationships and some political opinions on the record. But when Jimmy came out, and I just saw a complete change in the man, it was inspiring -- especially being in a hardcore band."