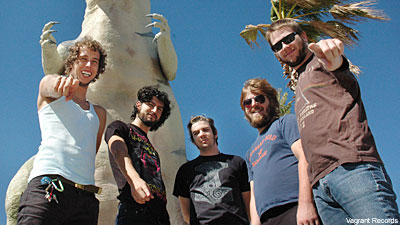 While Horse the Band's new album, 'Desperate Living,' may find the band sounding more 'Ninentdo-core' than ever, the band hates the tag that's been assigned to its sound, given the cartoonish sound afforded by the liberal use of keyboards. "The new record has more 'Nintendo style' than the last one, with more catchy keyboards, which is what makes it sound like that Nintendo style," guitarist David Isen told Noisecreep. "Objectively, there is still a lot on there. But nothing, lyrically, is about Nintendo. It never bothers me, but it'd be nice for people to stop asking us about it. It's awkward. We don't play video games. We just sound like we do."

The album, which takes its title from John Waters' movie, is undoubtedly influenced by a world tour the band embarked on last year, visiting some of the darkest places on earth. "No matter who you are, you are always influenced by what is going on around you," Isen said.

"That tour was a huge, pivotal episode in all of our lives, since that tour happened before the writing of the record, and we were all thinking about what we experienced. There were changes in our worldviews throughout the tour. We toyed with the idea of 'Desperate Living' as an album title for a while, since it's a movie we always liked. We thought we wanted to do a song or an album with that title. But it wasn't until we did that tour that we were ready, and truly understood the meaning. We experienced what it's like to live desperately, first hand, on that tour."

Isen doesn't even know if what the band witnessed showed up in the lyrics, specifically, though. "I don't even understand the lyrics or what they mean," he laughed. "Our singer, Nathan [Winneke], had been writing lyrics, and we liked some and others we didn't. To help him expand his mind and break outside the box, I gave him Ambien. He would take it at night, trip out and start writing amazing, epic poems that started out making sense. But by the end, they made no sense.

"It was not even words; it was as though he just smashed keyboard for 10 pages. He would pass out eventually, and look at lyrics the next day and not have any clue. He had no recollections." Mild amnesia is a side effect of the popular sleep aid, but it looks like the Ambien worked just fine for 'Desperate Living.'

"He would be inspired by his own hallucinations," Isen said. "There were some specific references to the tour, like the song 'Arrive.' Our guide in China would say 'Arrive' whenever we got somewhere. We'd get out of the car and he'd say, 'Arrive.' We would go on these long, uncomfortable journeys and say 'arrive' when we got there."

'Desperate Living' is out Oct. 6 from Vagrant.

Filed Under: horse the band, HorseTheBand
Categories: Interviews
Comments
Leave A Comment
Metal Bands With Deceptively Cute Names (PHOTOS)
Horse the Band Head to Russia, Despite One Town’s ‘Metal Ban’
Iwrestledabearonce Treated Like Royalty in Europe
Horse The Band Tour Dates With Endless Hallway
Since Yesterday, ‘The Artificial Truth’ — New Album
Horse the Band Document 48 Hours in Ukraine With New DVD
Ladies of ReignInBlonde.com Love Metal and Blogging
We Came As Romans: Christian by Association and Handy With Hammers
We Came As Romans Are Screamo … and Damn Proud of It