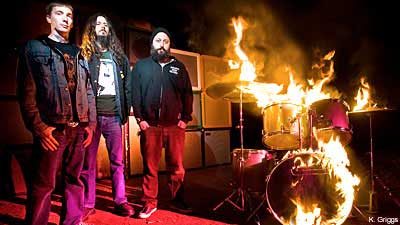 Since 2007, Atlanta's Zoroaster have been releasing their albums of psychedelic sludge on the band's own label, Terminal Doom, but in the past few months the band has said they were open for a change come time for their next album. "We might let someone else take the record to just get some of the money pressure off of us, just give us a little break," guitarist Will Fiore revealed to Noisecreep only a few short weeks ago.

Well, that change has officially happened as the band announced Oct. 2 that they've signed a deal with the multifaceted label E1 Music and have already set up studio time with producer Sanford Parker (Rwake, Pelican) to hopefully get a new album out by the summer of 2010.

The desire for Zoroaster to actually sign up on a label stems from the fact that releasing albums in DIY fashion can culminate mounting stress on a band due to the many limitations and hurdles a band faces when on their own. "It's really great to do everything yourselves," says Fiore. "But when you're a band putting out your own records, you run into these roadblocks where certain tours you think you might be able to get on -- but if you don't have someone behind you who can do something for someone else it's like, 'Yeah it would be great to have you, but we're gonna go with this band, because they have this behind them and they can give us that," Fiore commented.

In the past, labels have approached the band to sign them. In fact, their first release in 2005 was on Nachtmystium's Blake Judd label Battle Kommand Records, but the self-release route always made more sense. "Other labels didn't offer anything we weren't doing ourselves so we were like 'F--- it, let's do our own label.'

"None of us want to do anything else," Fiore added. "If I was smart, I would stay home and get a job and get some security but f--- that," laughed Fiore. "I just want to play music." And music they shall play, hopefully now with the ink setting more people will be listening.