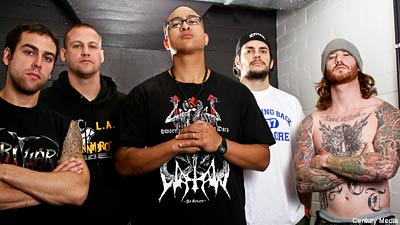 Terror will be a veritable touring machine this summer, embarking on dates with Grave Maker, Foundation and Naysayer through late July. Heavy touring is something the band is no stranger to, and fans and consummate moshers can expect the band to mix the set list up on this go round. "We will definitely be playing a few songs from our yet-to-be-released album, 'Keepers of the Faith,'" singer Scott Vogel told Noisecreep. "It's recorded and ready to go so we will play some stuff off it. Other than that, we will play a wide range of all our other stuff, from the demo in 2002 up to today."

The band selected "straight-up hardcore bands" to perform alongside them on this run and elected to keep things economically viable for fans with shrinking wallets. "It's small clubs, no-nonsense and low ticket prices," Vogel said. Vogel will be a bit of a fan himself, saying, "I'll be watching all the bands, especially Naysayer. Their frontman is a wild stage crusher."

After the U.S. tour, Terror will head to South America with H2O and release 'Keepers of the Faith' in September, during which they will find themselves headlining the Hell on Earth Tour with Every Time I Die, All Shall Perish, Down to Nothing and the Acacia Strain.

While summer touring is a staple of any thriving band, it can suck. It's hot, sticky and often uncomfortable, with body odor serving as the prevalent scent. But it can also be like an extended vacation and touristy. "I hate hot weather and all that s--- ... late night pools are fun ... going to a movie during the day is fun. Finding a baseball game in the city you're playing is great, too," Vogel said about how to be as carpe diem as possible while on tour.