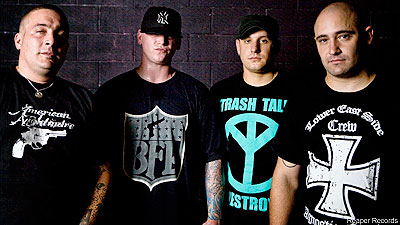 Death Threat have been around forever, and the hardcore band will be reducing venues to wreckages and piles of smoldering ash on their upcoming tour, supporting their seven-inch release, 'Lost at Sea,' on Reaper Records.

"We're working on a new set list this week before the tour," vocalist Aaron told Noisecreep, hinting about what fans can expect to hear if they come out to the shows. "I've got two guys filling in, so we figured we would switch it up a little if we had to practice any way. It will consist of the standards like 'Dead at Birth' and 'Last Dayz.'"

But while 'classics' will mark the set, Aaron also said Death Threat has "added some never-before-played songs and we're bringing back a few we haven't played in the last four years. We're psyched to be hitting the road again for this partial U.S. tour and hope to do another one in the late summer concentrating on the Southwest and the West Coast, with a few Midwest and Southern dates to get us there and back. We're going to eastern Canada with Maximum Penalty in June and are booking a four-week European tour as we speak. One tour at a time for now. See you all soon!"