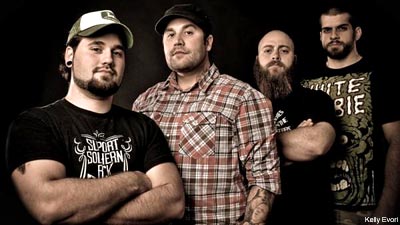 Boasting a tone heavier than bricks, a throaty scream gravelly as a rock quarry and a collective résumé tagging Screams of Erida, the Acacia Strain, Seeker Destroyer, and Buckhunter, New England's Martyrs and Madmen have not only completed recording the band's debut EP, 'Humanimals,' they've made the effort available streaming online . It probably doesn't hurt, though, to add another noteworthy name to the ranks; Cannae bassist Shane Frisby recorded the four-track effort from his own studio, The Brick Hithouse (Cannae, the Ghost Inside, Bury Your Dead) in Hyannis, Mass.

Eagerly awaiting the physical copies -- due in this week -- for distribution at future shows throughout the Northeast (to begin with, we're reassured), Noisecreep spoke with talkative and opinionated frontman Lee Liddle (formerly of Screams of Erida and Once Beloved) about the progress his band has made with so many seasoned vets in the lineup, despite the range of experience. "Our primary concern isn't fitting in," Liddle tells Noisecreep. "The most important thing to us is integrity and writing the best music we can ... playing pummeling, driving, intense music that gets people moving."

Everybody can walk the walk in the world of extreme music, though. But with 'Humanimals,' Martyrs and Madmen hopes to personify that walk and show it off a bit, thanks to not only a diverse range of past experiences in the industry, but also to a conglomeration of inspirations from which to draw inspiration. "Every single one of us have extensive and varying tastes," Liddle tells Noisecreep. "Anything from classical to instrumental, southern rock, jazz. Jesus -- anything from Explosions in the Sky to Iron Maiden [laughs]. It's paramount for musicians to have extensive musical background. It makes you a more rounded human being, but as a musician it also doesn't impose as many limitations on what you can write."

With a recording from Frisby, a drive to compete and the desire to make this work, Martyrs and Madmen are resilient at starting over with something new, despite their collective experience. "I've always had a day job for whatever project I've been involved with, and that's always a really big part of my life," Liddle reassures Noisecreep. "So is this band." Dates to support the release of 'Humanimals' will be announced shortly. In the meantime, a preview of the music on the EP is available on the band's Web site.