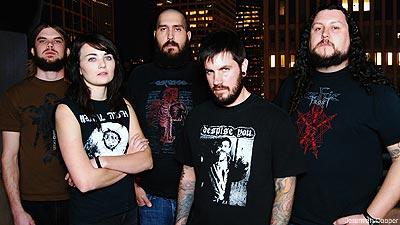 "I am a circulation librarian for the city -- the lady that makes sure you pay those $0.25 fines. I've also just recently graduated from college. So now that I'm finally done, not sure what's next,"Landmine Marathon vocalist Grace Perry told Noisecreep about her day job.

Turns out, she's not sick and tired of the attention she gets as a 'hot chick in metal' or being a girl who fronts an extremely aggressive band, simply because she doesn't get as much recognition for that as you may think. "Honestly I receive a lot less attention than people may think! It seems as though the fans at our shows do not even notice I am a girl," Perry said. "That may be due to the fact that I'm usually jumping on people's heads, running into walls and getting thrown all over the place."

But that's fine with her, since Landmine Marathon don't play up that angle like some of their peers. "I have never dressed or acted in a way that compromised the integrity of the band, and although we definitely acknowledge the fact that I am a chick in a male-dominated genre, it never changes who we are and what we're trying to do. I admit it can get a little annoying when I am asked questions that are so over the top. Such as, 'Do you get turned on when you're on stage?' To which I just laugh and usually respond with a s---ty sarcastic comment."

Perry is an admitted "third generation Arizonian" who says her "tolerance to the cold doesn't go below 60 degrees." The state is a polarizing place, because of the extreme heat, where people who visit there consider it somewhere to relocate or a nice place to visit, but a better place to leave. Perry isn't leaving, though. "Almost all my family lives in Arizona, so they would pretty pissed if I ever decided to up and move," she said. "Unfortunately, the music scene here is kind of a bust because of how spread out everything is. There are never any central venues to play at. Also these days, people seem to be so apathetic towards going to shows and supporting local bands."