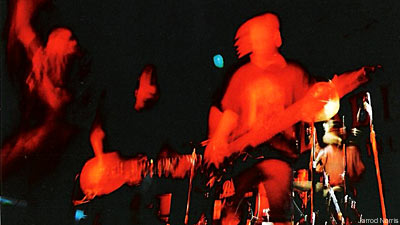 Phoenix band Overcome has reunited after breaking up in 2000. The Christian metalcorists had released two full-lengths on Tooth & Nail/Solid State Records before hopping over to Facedown Records. Vocalist and founding member Jason Stinson has taken up guitar duties and is replaced by Jarrod Norris on the mic.

"When [Stinson] put this new band together he asked Thomas Washington, the original bass player and vocalist of Indwelling to do vocals," Norris told Noisecreep. Indwelling was Stinson's death metal project after Overcome. "As well as Jason Bowen, the longest-running Overcome bassist to play bass. The other two guys are new, quite a bit younger and previously unfamiliar with Overcome, but they are both amazing musicians. Basically, Stinson just wanted to start playing again. At first there was no intention of calling this new band 'Overcome,' but as the pieces started falling into place it just made sense to do so."

Norris has been longtime friends with Stinson, beginning in the mid '90s when Overcome appeared on a compilation on Norris' record label. Norris ended up relocating to the Phoenix area in 2001, and the pair's relationship continued. "Since then, every time I go to Phoenix I stay with Stinson and his family," Norris explained. "Over the years, we have become really good friends and so have our families.

"When I lived in Texas I did vocals for a hardcore band called Legions Will Fall (not to be confused with the 'nu metal' band of the same name). We recorded enough songs for an EP but it was never released. I gave Stinson a copy of those songs years ago when I first moved to Arizona, he liked my vocal style."

Stinson enlisted Norris and his vocals for Indwelling, but the band disbanded shortly after. Earlier this year, Stinson had been talking about forming a new band, but instead of being something brand new it ended up as a reincarnated Overcome. "I am a fan of Overcome," Norris said. "They have been one of my favorite bands pretty much since they started recording many years ago. So when Jason started talking about calling this new band Overcome, I was super excited about it. He said they were going to relearn about eight old songs and start writing new ones. He said they really want to focus on new material and continuation and not so much as a 'reunion' band."

Norris stressed that this isn't necessarily a reunion, but a "new chapter" in the band's career. He also expressed concern about whether people would recognize the new band as Overcome, due to the different vocal and songwriting styles. "He assured me that this was to be a new chapter for Overcome and to just do my thing. Not a problem. I love playing live and recording. I also love to write and have been doing so for years, so I am super stoked to see how this thing turns out. Fans need to know that I do not sound like Stinson vocally, nor am I going to try to sound like him, embrace it or move on."

Overcome does have a current vocalist in Thomas Washington, though he will be leaving the band later this year, opening the position up to Norris to fill. "My involvement so far has been limited," Norris admitted. "We are set to record two to three songs at Arkane Digital (Ryan Butler of Northside Kings and Landmine Marathon's studio) in a few weeks. Thomas will most likely be doing vocals on the demo songs, but I'll be at the studio, so we'll see what happens."

Norris commented on his role and the future of the Christian metalcore band: "My perspective is not just from a vocalist position, but as a long time friend and fan of the band. I won't reveal the old songs that we'll be playing live, but I can assure you that longtime fans will get a chance to once again pile on and sing along. I think that is what I look forward to most."