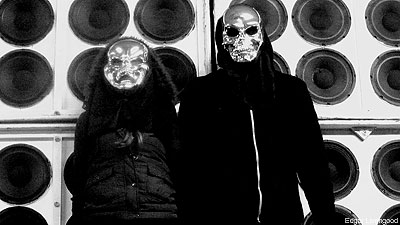 Jucifer's new album, 'Throned in Blood,' is conceptually about the spoils of war. We are in the throes of a war with Afghanistan right now, and we are constantly reminded of the wars that dot history and have had a ripple effect through this current day.

"War and the power seekers who make it are always on our minds," vocalist/guitarist Gazelle Amber Valentine told Noisecreep. "So much of human existence is war -- war with the self, war with fate and war with others. I think our music is always about war in one or all of those veins. 'Throned in Blood' is specifically about the failure inherent in victory and the way that atrocities are 'excused' by a so-called noble result. And yeah, that's part of our current war -- and also part of all other wars."

This blackened, noisy, escaped-from-the-bowel's-of-hell war ensemble will be releases by the band themselves on their own label, but it will also be available on vinyl through Alternative Tentacles, one of Jucifer's former labels. While vinyl is still popular among collectors and it sounds better than any other medium, Valentine -- who is married to drummer Edgar Livengood -- said the reason for releasing a vinyl edition of 'Throned in Blood' is just as one would expect.

"We're vinyl people ourselves, which is reason number one," she said. "It sounds better, lasts forever and you get bigger art. And it just feels good to hold and touch! We put a lot into our albums, and it feels like an LP does more justice to that, to the art of music making. The other, more common formats are so disposable. We know a lot of our fans share our love of vinyl."

Valentine and Livengood are happy to release the album themselves, as it keeps them focused. Valentine said, "There are always some people telling you you're a genius, and some others telling you you're a waste of space. You can't let either of those groups distract you from your mission."

'Throned in Blood' is out April 6 via Nomadic Fortress.