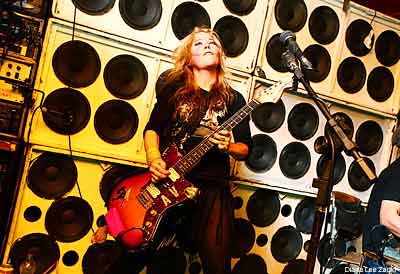 Hipster hangout Kung Fu Necktie is rapidly becoming the go-to venue for quality metal shows in Philadelphia, and those of us that call the 215 home couldn't be happier. After playing host to the likes of Krieg, Total F---ing Destruction, Nachtmystium, Wolves in the Throne Room and Krallice in recent months, the dimly-lit alcove welcomed yet another trio of amplifier worshippers into the fold on Jan. 8 in the form of Jucifer, Salome and Deathbeds.

The show was slated to end by 10 PM to make room for a late-night dance party, and thankfully a veritable army of the doom faithful made it out at the ungodly hour 7:30 PM to soak in local bruisers Deathbeds' Integrity-meets-Iron Monkey sludgecore odes. The five members all looked rather dapper, turned out as they were in matching suits and ties (though the raw-throated singer elected to keep his fitted hat firmly in place) to celebrate the release of their debut seven-inch (available from Young Lungs Ltd.)

Virginia doom crew Salome turned it up to 11, opening with 'Carving the Ether,' a track off their megalithic new split with Baton Rouge, La. sludge barons Thou. The bassless trio ran through a collection of songs from both their self-titled record and upcoming Profound Lore debut, closing with the earth-shaking 'Black Tides.' Over a drink or three post-show, drummer Aaron Deal tipped Noisecreep off to the band's upcoming appearance at SXSW and possible plans for a split with a certain band of Chicago atmospheric sludge upstarts -- keep your eyes and ears peeled!

A towering wall of amps loomed threateningly over Kung Fu Necktie's diminutive stage as the otherworldy beings that make up Jucifer's dynamic duo were gearing up. I counted at least eight, and keep in mind, this is their small setup. Pre-show, sprightly guitarist/vocalist Amber Valentine, with her sparkly babydoll dress, killer boots ad Cheshire cat grin, seemed to be balanced by her more reserved better half, drummer/vocalist Edgar Livengood. That is, until they took their places on stage and the first note rang out. 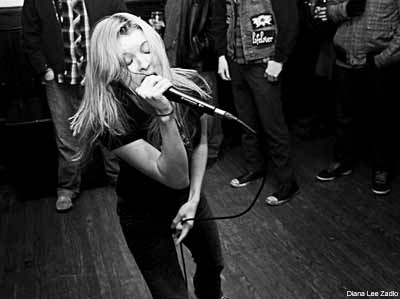 Suddenly, Amber was a whirling dervish of fringe and lightning, screaming her throat raw and layering dreamy pop vocals over their signature mishmash of noise/grind/doom/pop and Edgar's unexpectedly savage assault. Strobe lights flashed, amps hummed, strings screamed, and eardrums bled -- this was Jucifer at their finest. Once the ringing in our ears had quieted a bit, Amber filled me in on the band's recent doings; a few weeks spent holed up at Akdar Studios in scenic Bernville, Pa. had yielded some fine fruit indeed, and a brand-new split with female-fronted doomhaulers Show of Bedlam graced their merch table alongside handmade t-shirts and posters.

Amber broke down Jucifer's philosophy (and why they need so many damn amps) thusly, saying, "Music is a ride. It's a ride for us, and it's a ride for the listener. We like the ride better if it's not predictable. The only intent is to express what we feel and vent what we need to, and do justice to the ideas we're addressing. And yeah, to decimate." Mission accomplished.