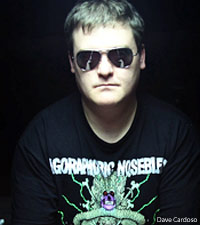 David Hall has made videos for a bunch of bands, like Jucifer and Sigh, but he is also shooting darkly disturbing feature films based on albums. He's done it for Today Is the Day and for Canadian grindwhores F--- the Facts. The film is trippy and David Lync'hian in style, and it's not meant to be easily digested, that's for sure. Weak stomach? Soft mind? Faint heart? If you check 'yes' to any of those ailments, then back far, far, far away from 'Disgorge, Mexico: The Feature Film,' because you may want to sit this ride out. Hall also made a documentary about the famed Maryland Death Fest. The filmmaker clearly understands the genre and goes beyond the audible to create visual terror with his films. The film is a definitely a companion to the music, because it's raw and brutal.

"I've been friends with the band for quite some time, and was actually was their bass player for 15 seconds in 2004," Hall told Noisecreep about why he chose F--- the Facts as his next subject. "I had made a video for a song off 'Stigmata High Five,' FTF's first full-length on Relapse, and then I made a short film that is actually included on the CD of the album 'Disgorge, Mexico.' Making 'Axis of Eden: The Feature Film,' which is based on Today Is the Day's most recent album, was such an amazing experience. And when it was over, I knew I wanted to keep making movies related to music. Topon [Das], the guitarist in FTF, asked if I would like to make a film for 'Disgorge,' so I jumped at the chance. It's an amazing album and it was a privilege to create a visual counterpart to the record."

The film was shot in Canada in February. So yeah, you can imagine. It was freakin' frigid, but Hall and his actors soldiered on for the sake of their metallic, off-kilter vision. "I learned that if you shoot a movie outdoors in February in Canada, it's gets really f---ing cold up in that piece," the director said. He made it through, though, thanks to the help of a huge parka, toque, mittens and a flask of Jim Beam!

"The actors were wearing silk robes and we had to take a lot of snuggle breaks, which was cool, because the cast is comprised of some fine ladies," he said. "I also learned that you can film in a lot of places without permission if you are quick and act natural. A lot of the film was shot at the University of Western Ontario, and we would basically just show up, do the scenes and then bounce without security being any wiser."

The film isn't aimed expressly for metal fans, either. Those with extreme tastes and open minds will certainly appreciate the film, which doesn't have all the standards like plot and dialogue! "It's my sincere hope that this film appeals to people who want something different out of a movie," Hall said. "This film is not about plot or story or anything that can be articulated in speech. I wanted to create a mood, an uncomfortable mood that will scar and stay with people.

"I guess it's along the lines of abstract expressionism. It's not a movie you watch on a Friday night after work to relax. It's probably the kind of film you watch by yourself, and let yourself go and just soak in. I think this film could appeal to people who are into alternative films and art films. It could also appeal to people who love urine and feces because there's a lot of that in the movie too." If you can get past the pee and poop, enjoy! This isn't your pretentious movie snob's arthouse flick!