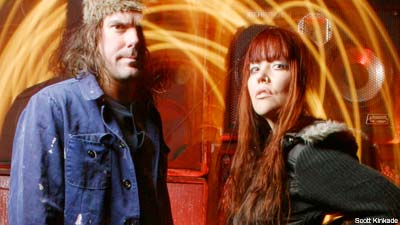 Musical duo (and lifemates) Edgar Livengood and Amber Valentine, collectively known as Jucifer, filmed the video for the 'The Mountain,' their first from 'L'autrichienne,' themselves, in somewhat exotic locations, such as Malibu, Calif. and the Bonneville Salt Flats in Utah.

But the pair certainly made sacrifices to create the visual end of their art, which they were able to see through from a seed of an idea to completion. "It was cool to be able to frame shots exactly how we wanted instead of trying to explain to someone else," Livengood told Noisecreep.

"For the beach footage," Livengood continued. "I used a borrowed camera with a wide-angle lens. It's all hand-held. It's raw and intimate next to most music videos, which use a lot of crew and equipment."

Valentine concurred, saying, "We wanted to make the video simple and grand and ominous, like the song. It was a lot of work. We both climbed a hundred-foot sand dune about 20 times. And the scenes where I'm in the ocean? The water was freezing. My boots took a week to dry. At both locations, the wind was really whipping. And the salt flats are so bright, I had trouble keeping my eyes open. But the shots look amazing."

Jucifer are currently on tour.