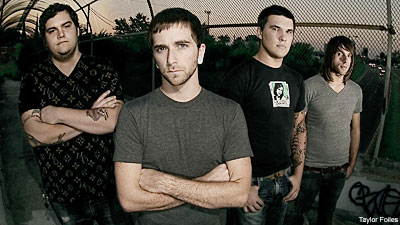 Indiana metalcorists Gwen Stacy have resurfaced on Solid State Records, which will release their next album, 'A Dialogue,' in October. Bassist/vocalist Brent Schindler told Noisecreep, "I would definitely say we're psyched. You never know what to expect to happen these days, but the jump to Solid State has been a beneficial one so far. I would also definitely say it feels like a new beginning ... almost a second try if you will." The band's previous label digs were at Ferret Music.

Schindler also revealed that 'A Dialogue' is "very personal and honest," and he and his cohorts spent a year and a half writing it. "It's Gwen Stacy done better and more mature," he said.

And we had to ask Schindler why they chose Gwen Stacy over Mary Jane Watson, so to speak. Any self-respecting comic book geek is well aware of the fact that the blond Stacy was one of the loves of Spider-Man alter ego Peter Parker, as was the red-headed, super-hot Watson. It's long been argued which of the ladies was Spidey's truest love.

"Well, at the time, we thought Gwen Stacy was more obscure to the public," Schindler revealed. "Turns out, a few years later, she's in the third movie! Oops! Oh well, we had it before the movie so we win."