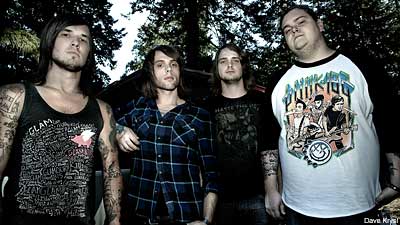 "Our new record, 'A Dialogue,' has been out for a couple months, and we're excited about its progress," Gwen Stacy bassist/clean vocalist Brent Schindler told Noisecreep. "As of now, we're home for a bit enjoying time with friends and family. Some of us are picking up side jobs or working on household projects that we're obviously unable to do while we're on the road. Some of us have been working on some side project work and the beginning stages of writing our third record has already begun."

Once these winter household projects are complete and the writing is a bit more solidified, the band will hit the West Coast with a string of dates in February with Vanna, Oceana and Dead and Divine. Schindler said, "We're more than excited to get that started, and don't forget to look for us playing the usual summer festivals this year as well. There is also a good chance that we'll be getting to spend some time with those of you in Australia this year."

If you can't get out to the shows, though, don't fret. Gwen Stacy will find an avenue into your heart in other ways. They (or their Webmasters) will be running contests on their social networking sites, offering up some rad band booty for all the die-hards. "The prizes ranging from signed gear to something much more extravagant," the bassist revealed. "I won't say because I don't want to ruin the surprise. We're excited about the year to come and what it will bring. For now, go out to a store buy our new record, 'A Dialogue' or come to a show and hang out and keep hitting up our MySpace, Facebook and Twitter for more updates on what we're doing this year."