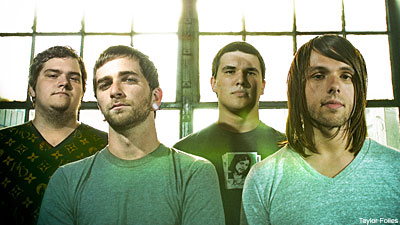 Brent Schindler, bassist for Gwen Stacy, ran into some trouble on a recent tour of Europe, but not as much trouble in which tourmates Poison the Well and 36Crazyfists found themselves.

"Poison the Well and 36 Crazyfists got into a bar fight the second day," Brent recounts for Noisecreep. "We showed up the next day, and the bass player for 36 has this gash in his head with stitches, and Jeff from Poison the Well's hand is broken. And we were just like 'Dang!' Well, we went to some dudes house and played 'Guitar Hero!'"

A few days later, Gwen Stacy drove into a difficult situation as they were driving into Switzerland. "We pulled off at this rest stop ... we were driving all night, so like six ragged-looking, tattooed dudes fall out of this van and are like, 'I gotta pee, I need food.' The usual. This police officer rolls up, see us, and darts off right to our van. Geoff [Jenkins], our singer and I, were in a little tiff about something ... so we're arguing outside of the van. Our merch guy is sitting on the curb or something, smoking a cigarette, and the cop rolls up, and was like 'You have your passports?' and we're like, 'Yes.' So we sat there and watched this dude scan all our passports and make all these calls, trying to find something on us. None of us have records, we're all pretty clean dudes. So we're just sitting there, thinking 'They're not going to find anything. We're legit. We might be ugly, but we're legit.' It ends with him yelling like really mad that he can't pin anything on us, so he's like 'Here', and he told us to leave."

Italy, it seems, also has it in for touring musicians. Brent and the rest of the band were sleeping at a rest stop in the boot-shaped nation. "We pulled off into one of those so we could sleep. We woke up, and I was sleeping in the loft of the van, in my underwear under a sleeping bag. And I get woken up, 'Hey, we need your passport.' So two days in a row, we're like 'Italy and Switzerland hate us!'"

Despite all of the hassles of crossing borders and playing shows, Gwen Stacy still found the time and energy to do some sightseeing. "We had key days off in London, Berlin, and Rome. We got to go inside the Vatican. It was a amazing. I stood at the Apostle Peter's grave, inside the Vatican. I have not seen Jesus in the flesh, but I was pretty darn close."