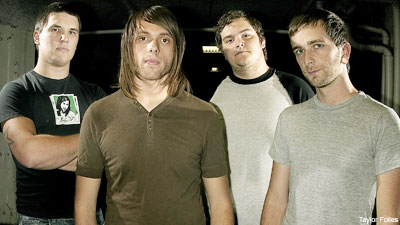 "Fruity Loops is a wonderful thing," says Gwen Stacy's Brent Schindler, bassist and vocalist (he says he sings the "pretty parts"). "Both records originally had been written on computers, just because we're on the road a lot. It's basically a digital program where you can change the piano to like an electric guitar sample."

Computers make the lives of a touring musician much easier, especially with booking, merchandising, and keeping in touch with venue owners, management, and fans. And now, with some funding and a little know-how, a band on the road can even get song ideas written and demoed before heading into the studio.

And that's exactly what Gwen Stacy did for tracks on their new album. "T.J. [Sego, drummer] had the triggers and samples from the last record on his drums," continued Brent. "He used that, and he took a sample of Slipknot's hi-hat off of their record, and August Burns Red's china, so he pretty much wrote out all the drums. He's getting really good with it, because he's just super computer and recording-savvy, and so it sounds like real drums. It's crazy. He knows how to play everything. He tracked through all the guitars. He read through Pat's [Meadows, guitarist] tabs, because Pat uses a program called TabIt. He went through and recorded it all."

Though much can be done by the band themselves, they realize that laptops and programs can't replace professional recording equipment and an experienced ear. Gwen Stacy is currently in the studio recording the new album with producer Andreas Magnusson who's worked with Oh, Sleeper and Haste the Day.