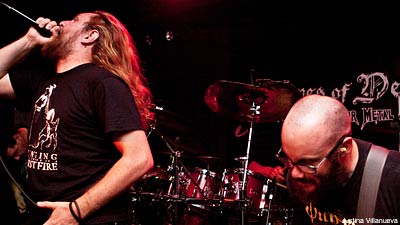 "We haven't played New York in three years." After a rumble of boos, vocalist John Strachan admitted that it wasn't because the band dislikes the east coast of the U.S., but it's the midwest that gets in their way.

The Funeral Pyre's sound falls into the hybrid blackened death metal. Think a combination of Withered and Book of Black Earth: blackened vocals, deathy melodies with a total in your face, almost hardcore vibe on stage. After seeing them shred at Fontanas on Aug. 6, it makes perfect sense that they have a split coming out with Phoenix grinders Landmine Marathon this winter. They are on tour for another three weeks. It's something they don't do often, so you may want to try to catch them.