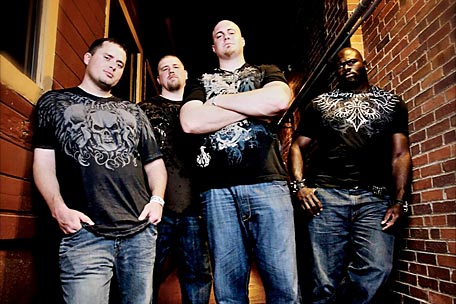 Free Reign -- the metal band that includes two NFL players who spend their Sundays on the Dallas Cowboys offensive line -- won the Most Metal Athlete Award at last year's Revolver Golden Gods Awards. Though drummer Cory Procter, who was also a Dallas Cowboy, recently parted ways with America's Team, apparently it did little to screw up the dynamic of the band. "We don't do band stuff during the season anyway," vocalist/guitarist Marc Colombo told Noisecreep. "We do stuff for after the season. During the season, it's all football and during the off season, it's all music!"

The band will release 'Heavier Than Metal' on April 19th, while their new single 'One Step Away' is currently available on iTunes. "It's our best song to date and it's going to reach a mass audience," Colombo said.

While some football-loving musicians might be star-struck by the day jobs of the members of Free Reign, the band was just as thrilled to be in the company of bands they love, especially at the Golden Gods Awards last April.

"We got to go down early and hang out for a few days with coolest names in metal: Dave Mustaine, Rob Halford, Zakk Wylde," Colombo said, with a kid-in-a-record-store excitement creeping into his voice. "We got on the cover for that issue of Revolver and I'm sitting next to Scott Ian. It was cool to be there. A lot of guys told us that they appreciate what we are trying to do, and I hope they are impressed with our next offering. We think it's next level stuff."

"If I could play guitar and do what he can do, I'd be happy," Colombo added.