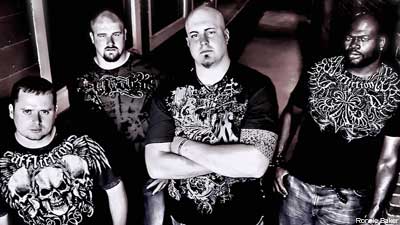 We can picture this scene. Dallas Cowboys offensive linemen Marc Colombo, Cory Procter and Leonard Davis are in their locker room with their non-Cowboys guitarist, Justin Chapman, playing a show as Free Reign. It's not just a fantasy; it's a reality. "We actually played in a locker room for Dallas Cowboys Family Day," vocalist Colombo told Noisecreep. "Less than a year later, we played a headlining show."

Turns out, their teammates, including quarterback Tony Romo, are supportive of this extracurricular activity. "He likes it, and he has been to our shows," Colombo said about Romo, known as much for his passing ability as for dating Jessica Simpson. "I think we have gotten a good response. Every show we've done, there have been numerous players there and a few of them know the songs. Actually, a few of our teammates came to see us when it was me and the drummer Cory Procter playing shows by ourselves. We were playing acoustic songs, and we didn't have our niche yet. But it's funny because those guys want to hear those songs, since they heard them first and know them! But we evolved into what we want to be as a metal band."

Colombo sites Killswitch Engage as one of his favorite of the newer crop of metal bands, saying "Adam [Dutkiewicz] is my favorite guitarist ever. He is riot on stage. When I saw them in Dallas, he was yelling at the crowd. I am from Massachusetts, so they are from my neck of the woods. I also love Avenged Sevenfold, and it's so sad about their drummer."

Colombo is clearly a fan of the genre and knows that some elitists and snobs may have a hard time taking the band, who released 'Tragedy' on Jan. 26, seriously. "People have a right to say that, because we hadn't produced any music yet," Colombo said. "But with this album coming out, a lot of people's minds will change. They need to see us as a heavy metal band, a force to be reckoned with. The album is good, and we put time and effort into it, and it came out exactly the way we want."

Colombo, Procter and Davis will spend the off-season playing shows, which they are currently scheduling, with a few lined up for March. "It's tough to schedule shows when the off-season starts, since everyone goes their separate ways. But we will do local shows."