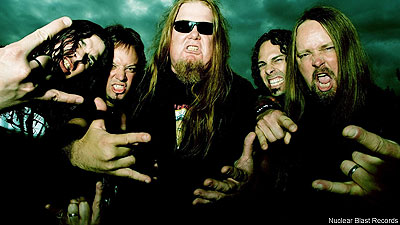 One of the key players in the second wave of the Bay Area thrash metal scene, Forbidden released four full-length albums before breaking up after 1997's 'Green.' The band is back together 12 years later, working hard on their next album, 'Omega Wave.'

"It certainly would have been easy to self-title it, but anyone who knows anything about Forbidden and our history understands that we spend a considerable amount of time thinking about these things," said guitarist Craig Locicero. "'Omega Wave' seemed most fitting and it's one of the thrashiest songs on the record. An 'omega wave' is the feeling of impending doom that hangs over everyone in these difficult times, more so than any other era in history."

Locicero continued, "Many feel that our time is almost up, partly because it has been written and predicted in almost every ancient society; also because most people can tell which way the wind is blowing, if you know what I mean. So the question is, is this all really happening by design or is it a self-fulfilled, man-made hysteria that we are creating by accepting it in our collective consciousness? Either way, it's a black wave of negative energy that exists to billions of people. That is the 'Omega Wave.'"

The disc is being tracked in Livermore, Calif. at Sonic Room/Audio Voyage Studios and is being co-produced by guitarist Craig Locicero and Tim Narducci, who, along with album engineer Brad Barth, play together in the band SpiralArms, whose debut album comes out this summer.

"Tim and I have know each other since 1986, when I was in Forbidden Evil and he was in Tyrannicide," Locicero said. "We were under-aged kids drinking beer in the Ruthie's Inn parking lot. That's some history and he knows his metal. Some of my peers have been grilling me on what it's like to produce a record for the first time. It's time consuming and somewhat difficult to get the performances out of someone you've known since you were kids, but Tim has been by my side every step of the way. We help each other stay focused and motivated. He's excellent and catching the little things and bringing the big picture together."

When 'Omega Wave' is finished later this summer, the disc will be mixed by Sean Beavan (Slayer, Marilyn Manson) will

"I still can't believe how lucky we are to have Sean to do it," Locicero said. "Sonically, he's very unique and on a different level. He's produced, engineered, and mixed some of the best sounding material out there. I met Sean through my work with Rick Rubin on the Manmade God record I did in 2003. Sean mixed it and we became friends. I learned a lot from him, and he really listened to my input when Rick asked him not to. Sean will make the Forbidden record sound like nothing else going, and that's a great thing."