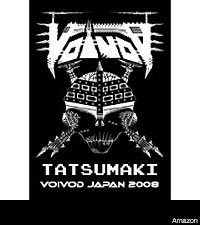 Over the course of their 27 year career, Quebec, Canada future-metal band Voivod had never been to Japan. So when they were invited to Kawasaki, Japan in September 2008 for a concert with Testament and Forbidden, drummer and founding member Michel 'Away' Langevin was beyond stoked.

"At the show, there were a lot of young kids with Voivod shirts, which was very cool to see," Langevin tells Noisecreep. "There were a lot of people there who had never seen us and who probably thought they'd never get to see Voivod, so it was very special for us."

A DVD of the concert, 'Tatsumaki: Voivod in Japan 2008,' will be released on Nov.17. The DVD was shot for Canadian television with three cameras and recorded straight from the soundboard. The lineup for the show consisted of Langevin, vocalist Denis 'Snake' Bélanger, new guitarist Dan Mongrain, and the original bass player Jean-Yves 'Blacky' Thériault.

In addition, 'Tatsumaki: Voivod in Japan 2008' includes versions of 'Panorama,' 'Treasure Chase' and 'Tornado' shot in Quebec City in July 2009. There's also a video interview with Foo Fighters frontman and longtime Voivod fan Dave Grohl. "This is the most bad-ass band I ever heard in my life," Grohl says. "Every musician has a signature,
Voivod had four. Voivod sounded like no one else. They are one of a kind."

Lastly, the DVD includes 'Seeking Voivod,' a previously unreleased mini-film in French with English subtitles. "It's a fake documentary that a friend of ours did last year," Langevin says. "It's a road movie, and it's pretty funny. I think it shows a side of us that a lot of people don't get to see."