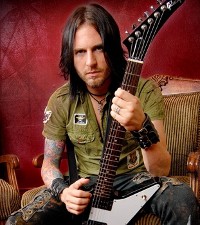 Five Finger Death Punch guitarist Jason Hook has revealed that his previous gig with pop star Mandy Moore lead him to his gig with FFDP. Essentially, Hook learned how to behave by working on a professional tour. He got his road legs under, him so to speak!

"When I moved to Los Angeles, I was broke," he revealed. "I just made a pact with myself that if I could just get into the field, I was going to take the job so I could learn whatever I could. It beat working at Home Depot. I had to beat out about 50 guys at the audition. And then it was like, 'Pack a bag! We're going on tour!' I was pretty happy about it, you know?"

He absorbed as much as he could, educationally speaking, from working for Moore, saying it "taught me a lot: There were rules, you had to be on time, you had to be prepared, you had to be focused, you had to be responsible. It taught me discipline and how to work in that environment. I'm very grateful to have the history that I have. Some people think it's not cool, but that's OK. I had the option to do roof tiling and all that stuff. I just didn't want to."

We can't say we blame him. It's not uncool, by any mean. However, a cool tidbit about Moore is that her husband is alt-country crooner Ryan Adams -- and he likes metal. [Blabbermouth]

System of a Down are back together and playing shows, obviously, as they tour with fellow '00s metal behemoths Deftones. Frontman Serj Tankian confirmed that the band has not made any plans for a new album ... yet. But when they do, fans will be made aware! "When we do everyone will know," Tankian said. "We haven't really discussed another record as of now with any of the guys really, it's something that when it's the right time we'll do it. I don't even want to say there's [a new System of a Down album] coming because we haven't really talked about it. I just assume when it's the right time, it'll materialize like everything else in the universe." [Loudwire]

Isis will drop Temporal, a retrospective collection comprised of unreleased rarities, remixes and videos, via Ipecac Recordings on Nov. 6. Temporal covers the band's entire discography, from Mosquito Control to Wavering Radiant, which was their final full-length.

Isis' Aaron Harris commented on the release, saying, "It was fun and also very nostalgic collecting material for this release. I hear our catalog differently now that I'm not living with these songs day to day. This is a special collection of outtakes, demos, unreleased tracks and videos; some of which I think we even forgot about." Stay tuned for the complete track listing. [Via Press Release]