The fans of Thirty Seconds to Mars have an ally in Five Finger Death Punch bassist Chris Kael. The musician offered his opinion on the alt rock band's meet and greet policies and behavior, noting that they wear medical gloves to protect their hands.

Perhaps that's a move to prevent the passage of germs when anti-bacterial hand sanitizer just doesn't do the trick?

Kael shared a photo of Leto and co. with the gloves on their hands on his Instagram feed and commented: "#30SecondsToMars at a meet and greet last week - WEARING RUBBER GLOVES! Nice message to send to your fans. #LivingInABubble #WeWillNeverBeThatBand #Dicks #PleaseSneezeOnThemIfYouGetTheChance."

While we understand Kael's outrage at this move, since it creates a bit of a barrier between the band and its legion of fans, it's an all-too-familiar scenario to see shows canceled due to a member falling ill on the road. Bands on tour meet fans, venue staffs and strangers, often shaking hands with tons of people. Therefore, they are exposed and susceptible to tons of germs and comprised immune systems, more so than when off the road. So this could be a precaution on Leto and co.'s part.

Or maybe the gloves are pieces of a costume or a gimmick for the band, known for its visuals and out there imagery? Who knows?! But from a fan perspective, it probably sucks to shake the hand of one of your favorite band dudes while they are wearing protective gloves!

Think of this way. It would be worse if the band wore surgical masks or if they charged a premium for the meet and greets. 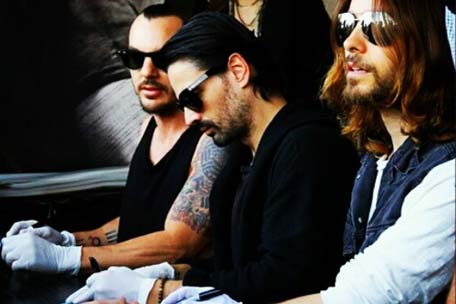