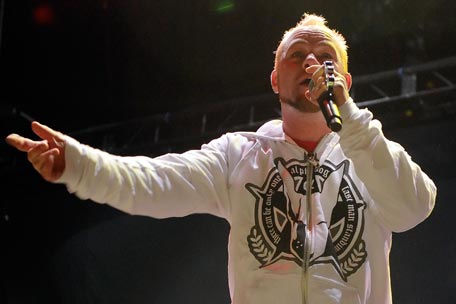 You know what they say about going big or going home, right? Well, Five Finger Death Punch are going huge with their upcoming release plan. The band is releasing not one but two new studio albums this year, with the first, 'The Wrong Side of Heaven and the Righteous Side of Hell Volume 1,' landing via Prospect Park on July 30.

The deluxe edition will feature a bonus live CD, 'Purgatory [Tales From the Pit],' which will be 15 songs strong. The album itself already features 14 songs, so there will be plenty for Five Finger fans to feast upon and to raise their fists to this summer. The pre-order is available as of June 18 and the release will be accompanied by a redeemable limited edition t-shirt with the physical pressing only.

But wait, there's more! A whole lot more. The band is certainly doing its best to satiate the Five Finger faithful. Also on June 18, a collectible limited edition box set featuring a 5FDP lunch box, the deluxe version of the album with the bonus live CD, a free early download of an exclusive new track from volume 1 of 'The Wrong Side of Heaven and the Righteous Side of Hell' and assorted collectible items will be available for pre-sale exclusively through the band's webstore.

The new single 'Lift Me Up,' featuring an assist from Judas Priest's Rob Halford, is available now.