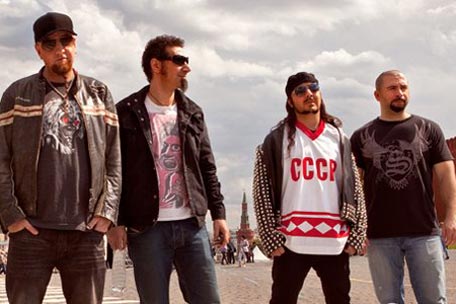 A few weeks ago, bassist Shavo Odadjian essentially laid blame regarding the delay of a new System of a Down record on frontman Serj Tankian's doorstep via a Facebook rant. The posts were quickly deleted and the drama quelled with a unified band statement about Odadjian's comments being an exercise in poor judgment that was not reflective of the whole. Now Tankian himself has addressed the situation, admitting he simply cannot commit to making a new SOAD record at this juncture due to other projects that demand his time and attention.

"A new record requires three years," the singer, who is promoting two non-metal solo efforts and wants to reserve proper time for family, told ARTISTdirect. "It's not something I can do right now. When I can commit to a three-year album cycle, I'll be down to do it."

He continued, "You can't take orders. We're not making pizza. You can't do it on anyone else's time frame." While some foodies might argue that a perfect pizza requires a measured and careful balance of time and ingredients to make it flawlessly delicious, Tankian won't treat his music like fast food delicacies.

Tankian was incredibly cordial about his band brothers, calling them "partners and friends." He also acknowledged the good place things had been in, given the band's notoriously fraught relationships and increased tension in its later period of existence. "We started touring again three years ago for good purpose," he said. "I think we missed being a part of that together. Of course, we have a lot of fans and people interested in getting a record sooner rather than later. Things take time though. Everyone has a life and has to have the right frame of mind to make a record at the same time."

Tankian will not make a record for the sake of making a record, either, saying, "I can't write a forced record. It's like romancing someone at a time you don't want to be romantic. It's not even a choice. We've enjoyed touring a lot. All of the tours have been well-received. We play really tightly -- probably better than we ever have. It's been cool."

System fans should comfort themselves knowing good things come to those who wait.

Filed Under: Serj Tankian, SerjTankian, system of a down, SystemOfADown
Categories: News
Comments
Leave A Comment
Back To Top