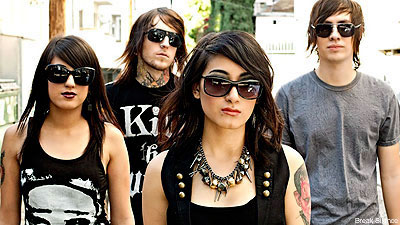 Forget all that nonsense about Eyes Set to Kill boasting the hottest metal chicks in sisters Alexia and Anissa Rodriguez, whose singing is accompanied by guitar and bass playing, respectively. The girls and their bandmates deliver the metal goods on 'The Listening,' a brand new song from their new album 'Broken Frames,' an album so aggressive that it should lay to rest any notions that girls can't hang.

Or in this case, play! Noisecreep is proud to present the exclusive stream for 'The Listening,' which deftly illustrates the Phoenix band's ability to rip and snort like demons all the while keeping our attention with clean melodies. But despite the song's bluster, it holds a beautiful lyrical sentiment, doubling its impact.

Listen to 'The Listening'

"'The Listening' captivates every ounce of faith I lost in God during the darkest times I felt like I could only count on hope," Alexia told Noisecreep about the personal nature of the song. "Sometimes, I get let down by something I prayed so hard for and it causes me to lose my strength and beliefs. Since I firmly believe that lot of people only pray when they need something that is hard to reach on their own, I thought writing 'The Listening' would be an interesting way to make people think about why they really believe in God and if they are faithful for the right reasons."

'Broken Frames' is due out June 8 through Break Silence. Take a listen to 'The Listening.'