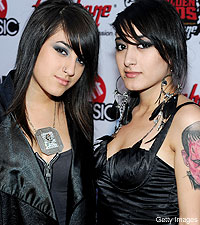 Anybody can look at Eyes Set to Kill sisters Alexia and Anissa Rodriguez and see they're hot. But the sisters, who were nominated at the Revolver Golden Gods Awards in Los Angeles for 'Hottest Chick in Metal' (they ultimately lost to In This Moment's Maria Brink) say it's not their good looks that make them stand out in the metal field.

"Some people think it's all about looking good, but I think the main thing it has to do with is attitude," Anissa told Noisecreep at the show. "[It's] someone who knows how to rock out and not give a s--- about whatever anybody else is saying about you. That's what I think it is," Alexia added, seconding her sister's belief it's all about the way you carry yourself.

It's an interesting category to be nominated for, one they'll never have at, let's say, the Grammys. So what did the sisters think when they found out they were up for the honor? "We were in the studio recording our latest album, and we thought our manager was joking," Alexia says. And while it may not have as much to do with music as some of the other categories, both sisters say it's a great compliment to be recognized. "We're honored, especially up against all the other ladies," Anissa says.

The sisters, along with the rest of their bandmates, will get a chance to show off that rocking attitude when they release their new album, 'Broken Frames,' June 8, and then hit the road as part of the Warped Tour. They expect the new material to be huge live. "When we first started writing the record, we wanted to make sure it was going to be a cool live album," Alexia says of the new songs, pointing out 'The Listening' and the lead single, 'All You Ever Knew,' as songs that are gonna be big on stage. "A lot of them are heavier, so we're really excited to see how they go over live."