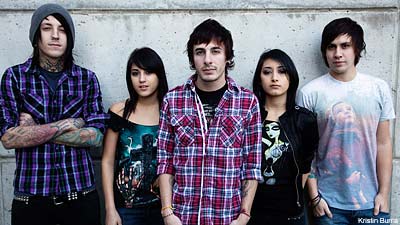 Eyes Set to Kill understand what it takes to make a name for yourself in the admittedly crowded music scene. Since they formed in 2004, life for the Tempe, Ariz. post-hardcore quintet has been on a never-ending parade of truck stops, cheap motels and sweaty rock clubs. Signed to BreakSilence Recordings, Eyes Set to Kill are just beginning to reap the benefits of their hectic touring schedule.

While out promoting their sophomore album, 'The World Outside,' the band stopped by Noisecreep's West Coast headquarters. Lead by singer and multi-instrumentalist Alexia Rodriguez, the group melds metalcore-informed guitars with radio-ready vocal melodies. We asked them if their poppier material worked better in a live setting than the heavier side of their sound. "Writing really catchy parts is a good thing for live shows because when they remember a melody or lyrics, it makes it more exciting. When you're singing to them, you'll see them singing with you and that makes it much more fun," says Rodriguez. 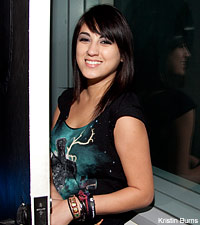 'The World Outside' has been a surprise hit on Billboard's Heatseekers and Independent Albums charts, and if a recent show at Los Angeles' The Roxy is any indication, ESTK's live show is arena-ready. The diary-like openness of Rodriguez's lyrics has resonated with a legion of young fans and has been a huge part of ESTK's success.

On tracks like 'Heights' and the heart wrenching 'Come Home,' the vocalist proves that she's the kind of lyricist who doesn't hide behind a wall of metaphors. On the title track to 'The World Outside,' Rodriguez reveals that despite their popularity, it's sometimes tough to get on stage. "There's been times when I didn't want to go on stage because something bad happened at home, and then I have to figure [out how to] block that from my mind and still put on a great performance."

You can check out the complete interview to see Alexia and her bassist/sister Anissa feel about being called sex symbols by magazines like Revolver and why Blink-182 changed their lives.