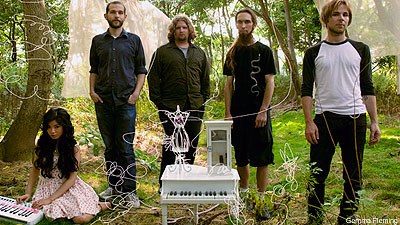 Along with all things Kayo Dot, multi-instrumentalist Toby Driver has been especially busy this month. Venue owner John Zorn invited Driver to curate a month's worth of shows at The Stone -- something Driver says has taken him about a year to plan. "I started working on it that long ago just because a lot of the people I wanted to get were international. And I know when you are planning something internationally you have to plan it like six months in advance," Driver told Noisecreep.

Even though most of the musicians Driver initially booked cancelled their shows for various reasons, he is still happy with all the shows. "It's weird because a lot of curators don't show up to their shows. But I just feel like, man, I just want to book stuff that I want to see," Driver said.

Because of The Stone's reputation, the venue naturally attracts enough audience members to negate the need for a promoter. This leaves a lot of creative room to book an array of artists, which in February's case, have included sets from Dysrhythmia's Kevin Hufnagel, Bloody Panda's Yoshiko Ohara, Joe Preston's Thrones, Krallice's Mick Barr, Alan Dubin (ex-Khanate) with Gnaw and a handful of improv sets.

On top of two Kayo Dot sets in one night, by the month's end Driver will have performed with his other project Tartar Lamb, an improvised electric guitar set with Charlie Looker and a fundraising improv set with John Zorn.

"Even though just going to shows doesn't seem like a lot of work. I'm still [at The Stone] from 5:30 to midnight every day," Driver said.

Booking shows is not Driver's current full-time job, even though he has put a lot of hours into it. His main band Kayo Dot releases a new full-length studio album April 6.