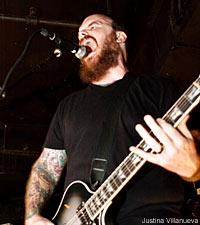 "We're Tournament, mother f---ers," frontman Montana Masback said as he introduced the band before diving into a rocking set at Brooklyn, N.Y.'s Europa. He also made sure to shout out show promoter Joanne Filipone of Osiris. That night Fight Amp, Burning Love and Coliseum too showed us their punk rock roots.

While Burning Love only had a three-man pit -- including the vocalist, who jumped off stage for a song or two -- those three men were having a lot of fun. And fun, straight-to-the-point music is what every band was about. Coliseum frontman Ryan Patterson would agree. "I get tired of listening to scraddily diddly every night," he said. It's the reason why he loves playing shows with Burning Love -- because they just bring it. And they did so despite having had all their gear stolen just two days before in Philadephia. 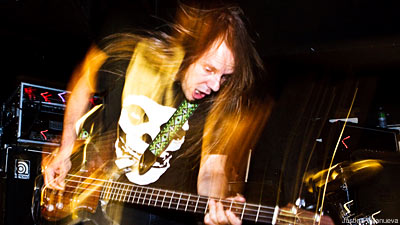 The three-man pit got a handful of others to join in for Coliseum's set. They kept requesting older songs, but the band was set on playing their newest material -- actually their new album 'House with a Curse' in whole. "I'll play some old s---. This is an intimate crowd tonight," Patterson said.

Then someone yelled, "Yellow penis!" He shot back, "What the f--- is going on in the pit tonight." I guess Patterson didn't want that much intimacy.

'House of a Curse' is out now on Temporary Residence Limited. Coliseum continue playing shows around the country until July 18. Burning Love are set for a very serious month-long trek around Europe. Be sure to check them out and the long list of gear they are missing. And if you catch them on the road, maybe even buy one of those 'High Anxiety' seven-inches.