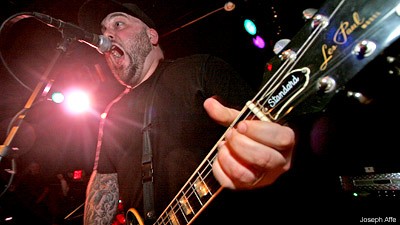 Hardcore enthusiasts know the name Maximum Penalty, but most don't realize that the New York hardcore legends don't advocate violence, like some hardcore bands tend to do these days and, more often, in the old days.

"Coming up in the '90s, when you would hear a name like Maximum Penalty, you would immediately associate the name, especially if it was on a hardcore show flyer ... you would immediately associate the name with a very brutal beat-down type of approach to hardcore," guitarist Joe Affe tells Noisecreep. "This band was never that. We came out in a time when we stuck out like a sore thumb, and we loved it. We were never that kind of beat-down type band. We always had something to say."

And on the band's forthcoming record, 'Life and Times,' which drops Oct. 6 and was funded on the band's own dime, Affe saysthe message is clear. It's a positive message -- one that everyone can relate to, and really, its a common hardcore theme: survival.

"The overall vibe of the record, lyrically, is to persevere through the ups and downs of life," he explains. "I don't think it's been our mission to throw fists. It really starts with your heart and your gut, and to really f---ing stand up straight and pull yourself up by the boot straps and rise above without having to f---ing literally brutalize your way through life. That was never our goal and never will be. But at the same time, there's a song on this record called 'Fight My Way Back.' That could be taken literally, but I think there are many ways to fight in life without using your fists."

'Life and Times,' helmed by producer Dan Korneff, is one intense offering that's heavy and should get the blood of any old-school hardcore fan flowing. It sounds in no way like the work of a bunch of married dudes. Because the guys have families, touring will be tricky for Maximum Penalty this year, but they do have stuff lined up.

"Deep down, we're still all a bunch of hardcore kids who still love it and still have that drive to keep it going," he says, before adding that the band will be playing dates on the East and West Coasts soon with Terror and Naysayer. A week-long Canadian run with Merauder is also in the planning stages for early 2010.

Download Maximum Penalty Songs
Filed Under: maximum penalty, MaximumPenalty, Merauder, Naysayer, Terror
Categories: Interviews
Comments
Leave A Comment
Dying Fetus Announce Fall 2021 Headline Tour Dates
Stick to Your Guns, Counterparts Lead 2019 Pure Noise Tour
Fan Dies After Stage Dive at Swiss Concert Headlined by Suicidal Tendencies
This Is Hardcore 2012: 8 Bands to Check Out at the Festival
Terror Cancel Czech Republic Concert to Show Support for Randy Blythe
Terror Singer Disses Refused Reunion, Halestorm Want to Turn You On + More
Terror to Tour With Stick to Your Guns and Trapped Under Ice This April
Bringing It Back for the Kids Fest Puts Hardcore and Dodgeball Together
Terror Focus on Truth for ‘Keepers of the Faith’